Kris Sinclair Christian takes a look at the Balenciega Exhibition showing at the Thyssen until 22nd September. 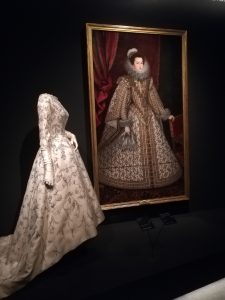 ” When my grandfather was working at a prestigious hotel in Paris he met Gary Grant. They struck up a close friendship and soon became very chummy. Just before the debonair actor left Paris he presented my grandad with a Balenciaga perfume for my grandmother. Today the bottle holds a pride of place on my dressing table.” So explained  Maria Angeles to me as we waited for the opening of the eagerly awaited Balenciaga exhibit at Museo Thyssen.

Days before the opening I had had the honour of being invited to private screening of the film Phantom Thread – inspired by the life and times of Cristóbal Balenciaga (1895-1972). Starring Daniel Day-Lewis,  in his last role before retiring from acting , the film may appeal to a relatively few buffs as the movie is slow and contains very few dialogues but nevertheless,  was highly acclaimed by the critics and won an Oscar and a Bafta.

Cristóbal Balenciega hailed from Getaria, a coastal fishing town in the Basque Country, Northern Spain, where both his parents José Balenciega, a fisherman and Martina Elzacquirre, a seamstress struggled day in and day out to make a living.

Balenciaga’s passion to create can be traced to his childhood when he spent endless hours in his mother´s room replete with bundles of colourful cloth. He observed her as she went through the painful process of measuring, creating patterns and finally sewing elaborate outfits for the aristocrats in town.

The highlight of every long summer was the arrival of the Marquis and Marchioness. Young Balenciaga paced back and forth in the vast and awesome Casa Torres. The huge villa owned by them fascinated the young observer especially the   paintings on the walls by prominent artists. A treasure chest indeed for a promising lad who would take the trendy world by storm.

The fresh odour of the fabrics from London and Paris lingered on for many a day stimulating his thoughts. imagination new no bounds. This was obvious in the umpteen pages of his notebooks packed with sketches of strikingly beautiful women garbed in stunning dresses.

Soon the marchioness became his customer and patron. She had a tremendous foresight and sent the talented lad to Madrid for training.

In 1917 he set up his own house in San Sebastian. Still in his early twenties Balenciega opened his fashion house both in Barcelona and Madrid.

Soon he was working with the royalty and eventually the world of Haute Couture took on a new dimension. – chemise, high-waisted dresses, ski-jackets, outlandish coats, black taffeta ,cocktail dresses, stunning black coats akin to kimonos emerged from the master´s skilful hands. He also reshaped women´s silhouettes adding beauty to the slim waist into the bargain.

Eventually he became famed for his exquisite craftsmanship and ground-breaking designs. Later on his creative talent extended to handbags and shoes.

When the civil war broke out Balenciega moved to Paris where his unusual creations caught on and   celebs in the likes of Grace Kelly, Ava Gardner, Jacqueline Kennedy and Mona Von Bismarck became his regular clients.

He had the honour of creating an extraordinary wedding dress for Fabiola de Mora y Aragón when she married King Bedouin of Belgium. He reached the zenith of his creations in the 1950s and 1960s.

This is the first exhibit almost in fifty years dedicated to Balenciega in the capital. Curator Eloy Martínez de La Pera have skilfully assembled 90 of his designs combined with 56 paintings.