Central Madrid’s congestion took on an animal flavour on Sunday as it´s streets and avenues were taken over by thousands of sheep for the annual Trashumancia. 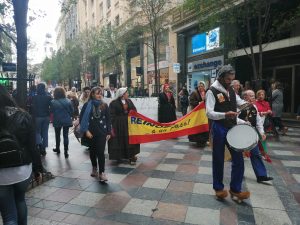 The festival which was started in 1994 and aims to keep alive the medieval migratory sherperd´s route through the city. The routes took the flocks south for the winter months.

According to the original agreement of 1418 the hersdmen paid the city 50 “maravedies al millar ( being a payment for every thousand sheep) in return for safe crossing ( and cleaning up).

Since the festival was started in 1994 the sherperds pay the city a nominal fee at a city hall ceremony. 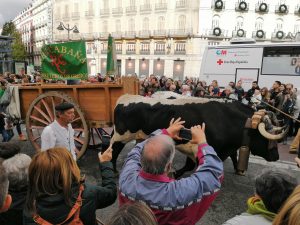 For Madrileños the festival has been growing in popularity as families line the route and descend into the centre to see the crossing of some 2000 merino sheep and over 100 goats as well as the sherpherd´s and vllagers dressed in traditional Castilian clothing complete with bands and emblems.