Peter Besas, Author of Hidden Madrid explains how one Madrid Chistmas past things nearly didn´t go quite as they should….. 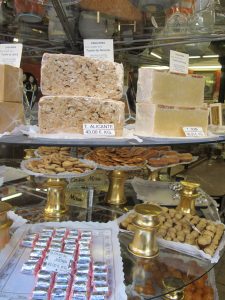 In the mid-19th century, a modest confectioner named Luis Mira had for years made his living by following a family tradition in the manufacture of the typical Spanish sweet called turrón which for centuries had given fame to the town in lived in, Jijona, near the city of Alicante on the Mediterranean coast. Luis was not one of your run-of-the-mill confectioners of sweets, but rather a veritable artisan, almost an alchemist when it came to the concoction of turrón. The secret recipe with which he made the turrón contained only the best ingredients. When preparing it, Luis cooked the honey in a double-bottomed pan, called a malaxadora, stirring the thick almond paste with an enormous wooden spoon in a hypnotic motion that only he knew, until the mixture had reached the consistency of what expert turrón-makers call the punto melero, that critical moment when the pan must be taken off the fire. Luis knew that his delicious concoction was nigh to being a nectar of the gods. And he had plans… big plans.

After having prepared a large amount of his “elixir”, the confectioner filled his cart to the brim and set off to the capital. He knew the risks of doing business in Madrid. He could easily be overshadowed by thousands of other hawkers, though he also knew that making a go of it there would raise him to be the top turrón-maker in all of Spain. It was a risk well worth taking. However, the road was long, and as he proceeded from village to village, before bedding down and in order to earn a little money, he would place his cart in the village square and try to sell some of his wares. Imagine his satisfaction when, upon a customer tasting his turrón he or she would exclaim out loud how delicious and tasty it was. Soon the word would spread of how exquisite Luis’ turrones tasted, and in a trice a crowd would assemble around his cart wanting to buy samples of the sweet. 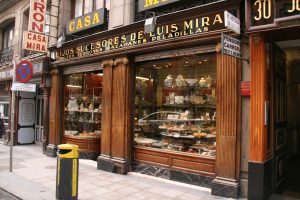 And thus it was in each village that he stopped in. By the time he had got halfway to Madrid he had sold out his whole supply of turrón and had to return to Jijona. Luis Mira then set out on the same trip to Madrid two more times, but as before he sold out his whole shipment of turrones before ever getting to the capital. Finally, on his fourth trip he managed to arrive at his destination and set up a stand in the Plaza Mayor. His success was so overwhelming that soon after, in 1855, he moved from his stand into a shop on the Carrera de San Jerónimo 30, calling it Casa Mira. The shop’s fame was so great that it eventually became the “Purveyor to the Royal House”, and among its customers were Queen Isabel II, King Amadeo of Savoy and the Kings Alfonso XII and Alfonso XIII. This can still be verified today, since Casa Mira is still in business and inside the shop you can see a tablet proving it.

It requires all your will power not to stop in front of the Casa Mira showcase, with its slowly revolving display showing the myriad of sweet delicacies on sale in the shop:  sugared almonds, marzipan, cakes, glazed fruit and, of course all sorts of turrones. The turrón is sold in blocks of five kilos, but can also be bought in tablets. At present, the shop is run by the descendants of Luis Mira, and one of the salesladies assures us that the preparation of the turrón is still kept secret, being passed on from generation to generation.

The Definitive Guide – How To Eat And Drink In Madrid