Around 50 animal rights activists protest against the fur industry while posing naked with fake blood smeared over them in the centre of Madrid. 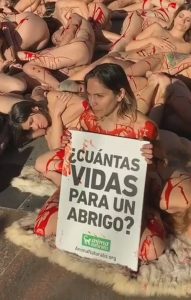 The nude protest took place just off the Puerta del Sol square in the centre of the Spanish capital Madrid and was organised by the animal rights organisation AnimaNaturalis.

Local media report around 70 protestors were involved with around 50 lying on the ground naked covered in fake blood for an hour on a cold morning, with AnimaNaturalis’ Madrid Co-ordinator Jaime Posada saying the protest was against the fur industry “which is responsible for the deaths of millions of animals each year”.

The images show the naked activists lying on the ground covered in fake blood while a woman holds a sign reading “how man lives for a coat?”.

A woman can be heard telling the crowd of the “chilling figure” that “over 60 million animals” are killed every year “for their fur”.

The protestors can be seen lying as if dead on the ground covered in fake blood and the videos were shared with the hashtag “wearyourownskin”.

The group wrote online: “Despite the low temperatures. We returned to dramatise the fragility, fear, pain and defencelessness of the more than 60 million animals which suffer and die in the fur industry every year.”

The group¡s co-ordinator Posada told Central European News (CEN): “Some people insulted us but everyone can have an opinion.”

Since 2007, the UK, Italy, Austria, Croatia, Greece, the Czech Republic, Sweden, Germany and the Netherlands have reportedly banned fur farming, with AnimaNaturalis calling for Spain to do the same.

Fashion brands such as Versace, Chanel, Prada, Armani, Calvin Klein, Hugo Boss, Ralph Lauren, Furla, Burberry, Michael Kors, Gucci, and Donna Karan have abandoned the use of fur in their collections and Prada recently announced that they would do the same this year.