Trashy magazines: pure pleasure. There is nothing more comforting to while away the time in this Brexit-limbo than to imbibe glossy gossip about celebrity shenanigans and their blackheads, cellulite, and weight fluctuation. News about baby rivals, betrayals, and surgery exclusives – resistance is futile. In the age of snap-chat judgements these magazines provide their readership with a godly satisfaction that even our pan-partners can not match. Where else would you learn that orange peel is not only an ingredient added to dark chocolate to make it taste less like powdered shite? However, once in a while we need a change, to shake things up, there’s only so much disaster one can stomach. Amongst the rather forlorn array that makes up a coiffure’s library, a client canalways find solace in the handy hairdresser classic, ‘Hello’. 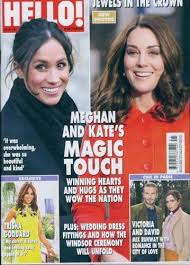 Providing weekly specialist celebrity and royal-based news, the ‘Hello’ franchise is a firm, international favourite. Originating from Spain it is priced just above some, but below the higher end stuff, placed in the middle of the road, which is where the tone of views sits within the inoffensive flutter of these flattering, non-threatening pages. In this epoch of non-experts who spit out judgements like bland bubblegum, one can find temporary respite in the sunshiny stability provided by this revista that cordially greets it’s guests right from the off with it’s well-chosen title, as any good host, or hairdresser should.

It is up there with the most sophisticated literature that can be found in a beauty parlour, without resorting to the top end fashion magazines that are two thirds advert, that trade in inadequacy and don’t require literacy. The familiar red and white branding has an almost educational air about it’s cover, reminiscent of a tabloid newspaper. ‘Hello’ usually runs several key celebrity stories, of which include updates on various royals. Getting to business with an advert, in this case a night cream, they follow swiftly with an article on a sports personality, accompanied by a host of beautifully lit images of their possessions, namely their mansion that boasts endless cars, marble, and slogans like, ‘Kiss me like you love me. Fuck me like you hate me’, written in a shiny silver lettering above a pool that could fit hundreds of refugees. Then we get to the juicy exclusive that the cover promises: dreamy holiday snaps of a singer and an actress who are now ‘allegedly’ engaged. It is assuringly delusional to see these modern day deities living as normal… except for their yachts that excrete endless jet skies, I clearly have the wrong friends.

This larger than most magazine elegantly ploughs on with it’s celebrity-based topics, all rather pleasing in tone, showing the best side of those who frequent these pages. After a smattering of smaller fairy tales of the rich and famous being out and about, typically appearing at a charity event, we get to the headline story that is covered in some depth, allowing for a decent amount of insight, all be it rose-tinted, and all importantly in the words of the celebrity on the front cover. The remaining articles reveal fashion trends, such as accessorising with chunky ethic jewellery, and planning ahead for autumnal monochrome. The happily ever after to this formatted froth ends to the tune of a page on the benefits of the sun and recipes for success before finally ending with another advert, this time for a watch, counting down to the next set of instalments. The ‘Hello’ echoes on until the next time we need a bit of make believe to catch our damp split ends.