The tradition on eating 12 grapes in Spain goes back it is said, to a bumber harvest in the late 19th century as way of eating the surplus grape harvest of that year.

As 2019 draws to a close it is expected that over 550 million grapes will be consumed in Spain in the minute from midnight to 00.01. That is over 2 million kilos of grapes gone in 60 seconds!

Few Spaniards will dare to provoke the “mala suerte” for the coming year by not eating their plateful, usually lovingly prepared onto each individual family plate by abuela the day before.

Everyone has their own way of keeping to the pace of the campanadas ringing from the clock atop the Real Casa de Correos in Sol – but whatever it is – be wary of the dangers – last year it was reported that choking on grapes was the 3rd highest cause of infant mortality in Spain – so eat safe! 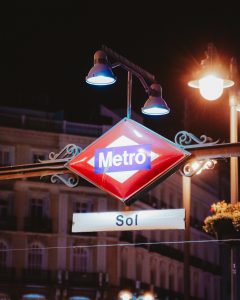 If you are planning to join the 17,000 odd grape eating revellers welcoming in the New Year in Sol plan your trip on foot ( the authorities have in place four entrance routes to the Puerta del Sol  being along the Carrera de San Jeronimo,  Calle Alcala, Calle Mayor and Calle Arenal). Arrive with plenty of time to allow for heavy security measures ( searches & confiscation of some prohited items such as wine bottles, firecrackers etc ) and police presence. Both the Cercanias and Metro exits are closed until after midnight when they reopen for entrance only.