This week marked the centenary of the first non-stop flight from England to Spain with the pioneering pilot that carried out the trip remembered by his grandson, James Bird. 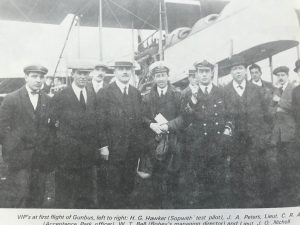 Speaking to the Madrid Metropolitan from his summer home in northern Provence, France, James spoke of his grandfather James Peters, who captained the Alliance P.1 biplane that made the 7¾-hour journey from London to Madrid, saying: “He was an engineering graduate from Leeds University and he got straightaway into aircraft design.

“He designed some of the planes for the First World War with a company called Robey-Peters and he designed a famous thing called the Gun-Carrier, which was primarily designed to bring down the Zeppelins because the normal little fighters’ guns were too light to bring them down.”

Bird, 80, explained how his grandfather came to make his remarkable voyage: “Originally his plane was designed to do the first Atlantic crossing, but unfortunately Alcock and Brown beat him to it in May 1919. And obviously Blériot had already done the first flight from France to England. So he decided to do England to Spain.” 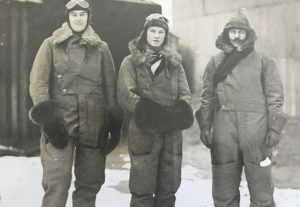 At the time, Peters was working for the Alliance Aeroplane Company, founded by English furniture manufacturers Waring & Gillow. “As the planes were made entirely of wood and canvas, they branched out into aircraft manufacture and my grandfather was their chief designer and pilot.”

The flight log survives and makes for thrilling reading. “Shortly after we crossed the Gironde, we ran into very bad weather and the clouds were very thick, ranging from 2,000 to 10,000 ft. After performing innumerable stunts in the clouds, we eventually found ourselves at 2,000 ft, flying just below them in a kind of heat haze and in most terrific bumps, which made the machine very difficult to fly,” reads an excerpt.

Having departed from the Acton Aerodrome in West London at 7:30 a.m., the flight touched down at the Cuatro Vientos airbase in south-western Madrid at 3:18 p.m. “My grandfather subsequently named his own house in Kings Langley ‘Cuatro Vientos’ to remind him of that first flight,” says Bird. 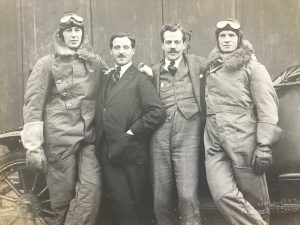 “He died in 1952. I was only 13 at the time, but I do remember seeing him. He was a fairly daunting figure. He was not famous for smiling,” chuckles Bird, who learnt of his grandfather’s heroics some two to three decades later.

“If you Google ‘aircraft crashes in 1917 and 18’, you’ll be amazed. There were four or five a month. These people really were pioneers and they really did take their life in their own hands,” says Bird. “During the First World War, when he was working for Robey-Peters, one of his prototypes that he was piloting crashed on the roof of an asylum, but he survived.”

Captain Peters and Navigator Curtiss took with them a gold cup on their flight to Madrid, a gift from Waring & Gillow to Victoria Eugenie, Queen of Spain. A copy of the accompanying letter survives.

“He went on to design an airplane that was going to make the first flight to Australia. Unfortunately, due to pilot error, the plane that took off in London subsequently crashed and never made it to Australia. The pilot and co-pilot, both Australians, were killed. My grandfather was so upset that he left the aircraft industry and went into motorbike design.”

Despite his premature departure from the industry, Peters is still remembered today as an important figure in the heady days of aviation.

The centenary took place this week on Wednesday.31 July.