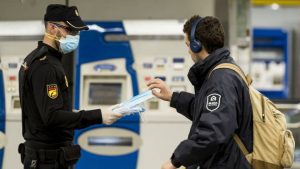 The new measure will come into force from tomorow May 21st and last for the remainder of the state of emergency now expected to end on June 7th.

The central government agreed with the leaders of the 17 comunidades that the measures would apply nationally in all public spaces such as a “public street, open-air spaces and any closed space that is for public use or that is open to the public, where it is not possible to maintain distance” of at least two meters.

It does not  apply for doing exercise such as jogging or where wearing “a mask is incompatible with carrying out activities, due to the nature of the activity”.

The new rules apply to everyone over the age of six unless they have some form of respiratory issue.

The State of Emergency has been extended by an additional 2 weeks from its present end  date of May 24th by the Congreso de Diputados. The PSOE led minority government of Pedro Sanchez had initially seeked a one month extention but the proposal came into difficulties from the outset due to the lack of parliamentary support.

The central government had previously announced a phased de-escalation to what the Spanish Prime Minister dubbed ” the new normality”. This has brought fears that with the increase in social interaction outdoors there would be a possibility of further spikes in infection rates unless additional protective measures such as mask wearing were in place. 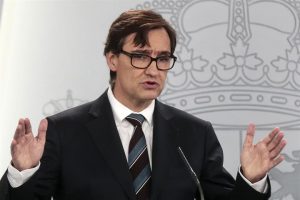 The Spanish Health Minister Salvador Illa announced today that the central government will not be handing out free masks to the public although some local governments such as Madrid are doing this, with some 7 million having already been distributed in the region.