Sheila Stuart, Chairperson of the British Ladies Association Madrid, has been awarded a British Empire Medal (BEM) for services to British Nationals Overseas in the New Year Honours List, published on Friday 27 December 2019.

The British Ladies Association (BLA) raises £30,000 a year for charitable causes, providing essential funding for the British Benevolent Fund, British Cemetery in Madrid and various Spanish domestic violence charities and soup kitchens in Madrid. Since her election as Chair, Sheila has been instrumental in actively attracting a new, younger generation to the BLA and breathing new life into the organisation. She was also instrumental in raising funds for the British Cemetery in Madrid when it was in a serious state of decline and needed support to repair the gatehouse. 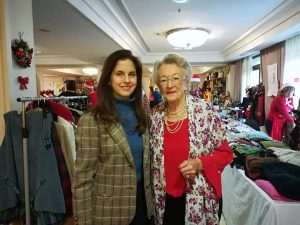 “It is extraordinary to see nine British nationals awarded at the same time – a real testament to the depth and diversity of the UK-Spain relationship and to the contribution that so many British nationals make to their communities across Spain. As Chairperson of the BLA Sheila has been the driving force in ensuring that the charity is much more than a social group. Its Annual Charity Bazaar is legendary and raises over £30,000 to help others!”

Sheila Stuart said: “I feel very honoured to receive this award, which, I feel, recognises the input of all the volunteers and members of the British Benevolent Association in Girona Province in providing help and support to UK citizens in the area.”

The nine UK nationals named in the New Year Honours List are: