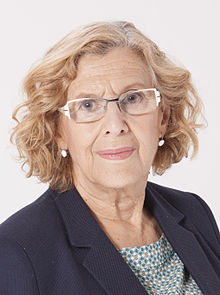 The mayor of Madrid, Manuela Carmena, has suggested making “consultations” with citizens on plans to the pedestrianise Gran Vía and explained that starting a shuttle bus would be an alternative to closing streets to the private vehicles.

“We want to make inquiries, as has been done on Plaza de España, on how to carry out the process of reducing traffic to Gran Vía and its pedestrianization,” explained the mayor in an interview on TVE.  In a seperate interview, Carmena confirmed that Madrid’s central avenue will only allow access to bikes, buses, and taxis before her term ends in May 2019.

Carmena explained that there are “many” alternatives to be able to carry out the process with one being “a type of shuttle bus that would run the whole of Gran Via which would prevent the need for many bus lines which currently pass through the same road” and said that major businesses along the road had told her that their year-on-year turnover increased 15 percent in the time when the road was closed.

The idea would include a second central bus “hub” as is the case in Cibeles, but placed in Plaza de España.
“It could be something that would speed up a lot,” she said.

Another idea would be to flat pave Gran Vía so that there are no curbs to give the avenue “agility.” Carmena plans to cease Gran Via being a way “to cross Madrid” because “it does not make sense”.

Plans to re-route traffic away from Gran Vía should prove no less contested, not least because the likely (but still unconfirmed) solution may ultimately be to restrict cars as much as possible to a wider beltway-style ring around the city core, leaving the whole of central Madrid as a traffic-calmed quasi-pedestrian zone where only residents have parking rights.