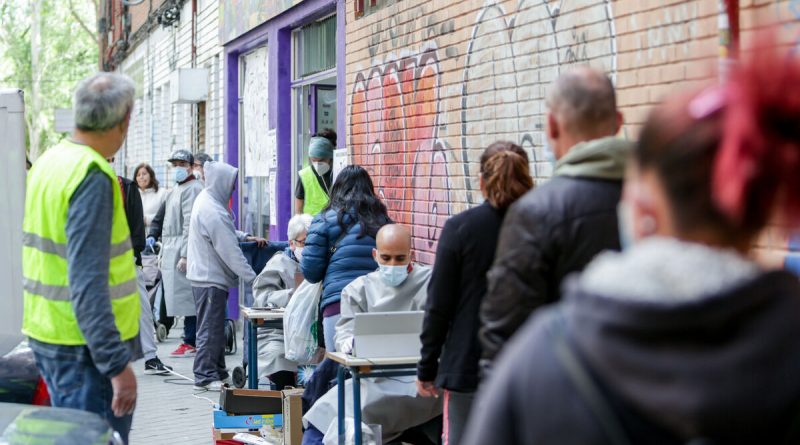 The NGO, Oxfam Intermón, warned in a report published today, 25th January, that the ongoing economic impact of the Covid-19 pandemic in Spain could leave one million more people below the poverty line and an additional 790,000 people in severe poverty reaching 10.9 million of Spain’s 47 million people living at or below the poverty line.

Oxfam’s report published to coincide with the Davos Forum claims the economic fallout will lead Spain to “unprecedented levels”of poverty.

The report highlights that 5.1 million people could be left in severe poverty (living off 16 euros a day or less) representing 10.9% of the Spanish population.

Those living in “relative poverty” (living off 24 euros per day) would represent 22.9% of the population.

The third wave of the coronavirus has further “hit the most vulnerable people,” says Oxfam director Franc Cortada.

Without an adequate government response, there is a serious risk that the future will  “deepen and perpetuate inequalities in Spain”, he said, and that “the poorest are impoverished while the richest “recover steadily.”

Although the Spanish economy is expected to recover in 2021 it is forecast that it will take up to 2024 to exceed its pre-pandemic level and unemployment is expected to remain above 20% for this period.

According to the NGO, the poorest people in Spain have lost, proportionally, up to seven times more income than the richest as a result of the pandemic over the last year.

Oxfam’s analysis assesses the government policies implemented in 2020 to protect the population, such as the Temporary Employment Regulation  (ERTE) and the Minimum Living Income (IMV) –  both of which need “urgent improvements in their implementation” as their initial results have proved to be less than effective.

Migrants are particularly vulnerable and over half could be living at or below the poverty line especially the estimated 300,000 “especially vulnerable” migrant workers  in irregular employment and “totally unprotected” by the government’s measures.