RICARDO SANZ – THE LANGUAGE OF LIGHT SEEN THROUGH THE CREATIONS OF AN ROYAL PHOTOGRAPHER AT THE RETIRO.

The Language of Light is indeed a befitting tribute to an artist who has sketched the Spanish Royal Family , celebraties such as veteran theatrical actress Lola Herrera and painter Antonio López. All are skilfully captured and even the art of the flamenco is beautifully depicted lending grace and colour to every moment.

His family members figure prominently in Ricardo´s works. His favourite picture happens to be the one of his mother he sketched in 1986 when still in his
twenties. Incidentally, the portrait is not for sale. Noted edifices in big cities also are brought to life and moreover, his canvases are also replete with folks from all walks of life for instance an elegantly attired paper boy taking a break in a street corner.

Art runs in the family. His grandfather, the owner of several reputable art galleries came into
contact with iconic artists such as Joaquin Sorolla, Ignacio Zuloaga and Velázquez Diaz. After studying under Jose Campos and earning an art degree at the Deusto (the oldest private Spanish university, founded in 1886, the first business school situated in Bilbao and San Sebastian) Ricardo moved to Madrid. He joined the noted circle of contemporary artists and came into contact with such famed artists as Felix de Toro, Ricardo Macarrón, Joaquin Lladó amongst others. 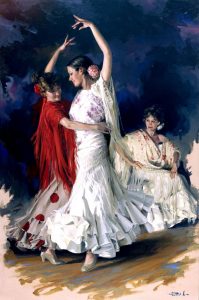 Young Ricardo spent endless hours at The Prado devouring the works of Diego Velázquez, Van Dyck, Rembrandt and other remarkable artists of the 19 th century. He took down copious notes of the great masters of art. His formal training also took him to France and Italy. He made the acquaintance of the Spanish Royal Family in 2000 – having had the opportunity of painting Queen Sofia garbed in a white outfit and holding a fan donning pearl earrings. Poise and grace are well balanced in the stunning portrait of King Felipe and the Princess of Asturias commissioned by Club Siglo XXI.

A winner of such coveted awards as The National Prize for Live Culture, The Goya Foundation Award and the Paul Harris medal awarded by The Rotary International Foundation Ricardo Sanz keeps a low profile and is a soft-spoken man.
Ricardo Sanz, a portrait painter as well as a master landscape artist, captures the very essence of life with every stroke, line and hue, awakening the senses, mind and body through 54 remarkable paintings at this interesting exhibit.