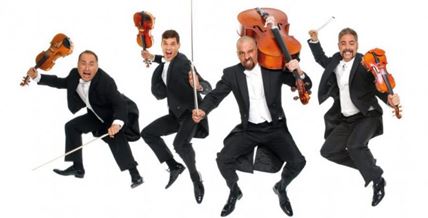 Pagagnini is a classical concert with a twist. Gags and wordless skits that are funny and original and have made this award winning show the talk of the town. Think classical violinists meets Reduced Shakespeare Company meets the comedy of the absurd. Well worth seeing.

Guernica – Piscaso´s masterpiece is celebrating its 80th anniversary of its first showing at the Reina Sofia where it has been housed since its return to Spain following the death of Franco.

This new exhibition starting April 5th deals with the painter´s view of war and how he expressed it through his work. The exhibition looks into the roots of the painting and specifically how earlier works dealing with violence as well as still lifes in the 1920´s and 1930´s and continue to how he expressed his horror as the world moved to world war.

Grammy winning Macy Gray comes to town and will be performing some of her songs from her new album Stripped, at the  Teatro Nuevo Apolo on 3rd April. Her many Madrid fans will no doubt get to hear too some of her older numbers and hits including Relating to a Psychopath, Sexual Revolution and Sweet Baby.

Chart topping Ed Sheeran is in Madrid to promote his already best-selling new album Divide (÷). It’s already reached the top of the charts as has two singles from the album Shape of You and Castle On The Hill. He has already sold 10 million records on both sides of the Atlantic and looks set to sell a whole lot more!

8th April at the WiZink Center

Founded over 40 years ago, Les Ballets Trockadero de Monte Carlo have established themselves as a musical sensation specializing in mixing trad Russian ballet with modern dance and humour which appeals to all ages. This, their anniversary tour landed in Madrid at Teatros del Canal – Sala Roja on the 29th March and runs until the 9th April
Share The Madrid Metropolitan: The only Madrid English language newspaper