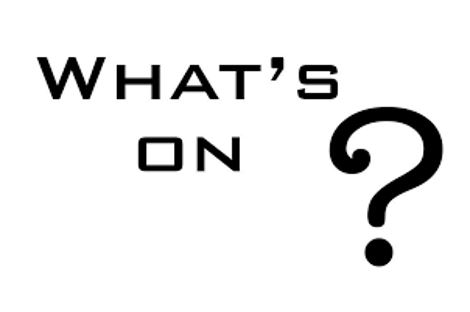 The director, Rafael Ruíz has devised a show that recovers the spirit of funambulism with The Funamviolistas. This performance combines classical music, theatre, dance, singing and humour.

This performance aims to recover that genre that was created two centuries ago in Paris and rapidly spread throughout Europe. In Madrid, 600 shows were premiered a year. Therefore, it seeks to recreate a new version of a classic of the stage arts through three women who use the strings of their instruments to offer a performance filled with smiles and entertainment.

Three performers are in a square that could be of any city. This chance meeting changes their lives forever as they build a friendship that leads them to tell of their dreams, their disagreements, their joys and their hopes, without uttering a single word.
This show has done nothing else but accumulate acclaim and awards, namely the Performing Arts Max Award for the Best New Show 2014, the Award of the Association of the Performing Arts Association of Andalusia for the Best New Show 2015, the Talent Award 2013 for the Best Musical Show and the 16thCastile and Leon Fair Award for the Best Hall Show 2013.

The International Contemporary Art Fair of Madrid confirms it’s still as vibrant and bold as ever.

In its 36th edition, ARCOmadrid – one of the most important contemporary art fairs worldwide – will gather once again the most innovative artists and top critics in the contemporary scene.
ARCOmadrid 2017 will have Argentina as guest country. The reason? The high quality of Argentine artists who’ve taken part of the event year after year. Attention will be drawn to Argentine art with activities in the main museums and art centres.

This year, ARCOmadrid will have fewer sections, in an effort to focus on quality and growth in the discovery of emerging talent and content, as well as to promote dialogue between artists, with one third of events aimed at this. It’ll draw a total 199 galleries, 160 of which are included in the general programme. Curated sections are ‘Argentina in ARCO’, with 12 galleries, ‘Dialogues’, with 10, and ‘Opening´, with 17.
Up to 67% of the exhibitors are international galleries, 43 of which are based in the Americas (32%), with a total of 10 participating countries. This confirms ARCOmadrid as a point of convergence for European and Latin American artistic experiences.

Some of the art galleries participating in ARCOmadrid 2017 are Alexander and Bonin, Chantal Crousel, Fortes Vilaça, Jan Mot, Sprueth Magers, Lisson Gallery and Team Gallery, plus others that have been in Madrid before, like Carlier/Gebauer, Esther Schipper, Jocelyn Wolff and KOW, or those that are coming here for the first time, like Dvir Gallery, Jablonka Galerie, Maruani Mercier Gallery, Labor, Michel Rein, Nara Roesler, Supportico Lopez and Tanya Bonakdar.
Among the artists who’ll exhibit their works individually or engage in intergenerational conversation are emerging talents like Elena Alonso or Fito Conesa and well-known figures, such as Anna Oppermann, Henri Chopin, Mihai Olos and Robert Breer.
There’ll be a series of Professional Meetings where art critics, galleries and artists can better understand the Fair’s content. The Forum will host talks on art collecting, organised in collaboration with Banco Santander Foundation.
The Museum Working Session will draw, as in previous years, museum directors and members, and for the sixth straight year, there’ll be a Meeting of Museums from Europe and Latin America.

Architecture and design will occupy a prominent position at the fair, thanks to a study conducted by the Madrid Technical School of Architecture (ETSAM) on ARCOmadrid and its architectural possibilities regarding space and circulation.

Based on the novel of the same name by the American writer Herman Melville, Billy Budd is a two-act opera written by Benjamin Britten (Lowestoft, UK, 1913 – Aldeburgh, UK, 1976) which is being performed for the first time in Spain with the participation of the House Choir and Orchestra at the Teatro Real Opera House, and a group of young singers from JORCAM.

In 1797, on board the HMS Indomitable, with an all-male cast, three sailors enlist for the English Navy, including the young Billy Budd. There he meets Claggart, the master at arms who is determined to destroy him.

The stifling atmosphere on the ship reflects human psychology and the cumulus of emotions found within the different characters.

Carnival, the great celebration of wit and humour, will be taking over the streets and squares of Madrid for a few days. A tradition in which costumes and masks are the key to living this fiesta to the full.

From 24 February to 1 March 2017, Carnival spirit will be filling the streets of the city. Children’s parades, festivals featuring music and dance from around the world, concerts, and traditional musical ensembles: ‘chirigotas’, ‘comparsas’ and ‘murgas’. These are just some of the activities programmed, based on the key themes of participation and diversity.

Madrid’s Plaza Matadero provides the venue for the Madrid Productores market on the last weekend of every month, bringing together over 90 artisan food producers from the region of Madrid. The market prioritises locally produced, high quality, organic and artisan food: direct from producer to consumer.

On market days, there are also demonstrations, talks, tastings, and many other activities related with gastronomy and food. And that’s not all. There is also a large area with tables, chairs and bars so that visitors can sample all the products they have bought at their leisure.

This event contributes to the development of rural areas in the region, helping small farmers and local producers to promote and sell their products. It also raises awareness among visitors about the environmental importance of consuming locally produced food.

Madrid Productores is so much more than a market; it is an ideal space to have a wonderful time with friends and family.

When I used to teach corporate English in companies, it was incredible to see how much English vocabulary Spanish students actually knew, but without being fully aware of meanings. There are many embedded English words in the Spanish language, mainly originating the technological sector, everyday consumable products or common business English terms. We are going to look at some of the most popular and iconic anglicisms and how some Spaniards feel about them.

Technological advancements have influenced a lot of everyday vocabulary. Some popular terms such as “microchip”, “internet” or even “fax” have no direct translation from English to Spanish, although “e-mail” (correo eletrónico) and “hosting” (almacenamiento) do. But most Spaniards use the anglicised version of the word over the Spanish one, which is perhaps another triumph for globalization.

I cannot imagine how many times the phrase “envíame un wassup” (send me a wassup) is blurted out in Spain on any given day. The name of this Smartphone messenger service is clearly a play on words of the colloquial expression “to be up”. A lot of Spaniards remember a very famous North American beer advertisement that aired in Spain a few years back. This advert stood out when the main character rings a buzzer to get in a party at his friend’s house, where he then screams, in a very annoying fashion, “waaassssup!” They are quite surprised to hear the origin of this vital Smartphone App.

The clothing sector has also been anglicised with such words as ‘leggings’, ‘shorts’ or even ‘jeans’. Spaniards love it when you explain the word ‘suéter’ and how comes from ‘sweater’, which itself conects to the verb ‘to sweat’ (sudar).

Another sector that has provided a lot of English vocabulary is consumer goods. Sanitary or cleaning products take the prize in this category, with names such as Fairy, Mr. Proper, Vanish, and Finish – the list is quite extensive.

A Kleenex is another great example of how a strong brand has been put to everyday vocabulary use. You could call it a “pañuelo de papel”, a paper tissue, but most Spaniards, like the British, just say Kleenex; branding and efficiency at their finest.

One of my personal favorites is the concept of ‘el burger’. When Spaniards go out to eat in one of the big hamburger providers, they refer to them as “el burger”, although only one has the word “burger” in its brand. I had the privilege to eavesdrop on a phone conversation where a young man was explaining where he was; “estoy en el burger”. Obviously, the other person needed details, so the guy had to quickly glance around to see in which fast-food place he was sitting.

The business world has also been influenced a lot by anglicisms, and many Spanish workers at a corporate level are familiar with words such as ‘timing’, ‘deadline’, or ‘branding’, for example.  I know of one case where anglicisms were not tolerated.  A student of mine who worked for a major Spanish company, arrived in class with a list of English business terms he wanted to review and to make sure he knew them by heart in Spanish. I asked him why he wanted to review them in Spanish if he already knew them in English, and he answered that he had an important meeting with one of the top directors who prohibited such anglicised words to be spoken at his desk.

On the other side of the Atlantic the Hispanic American population is brewing its own Spanglish dialect, which is basically mixing both English and Spanish words in a same sentence. You would really have to be bilingual to understand 100% of the conversation. Two of my personal favorite Spanglish words are the words “la troca” referring to a pick-up truck or “un viaje redondo” a round-trip ticket.

If Cervantes and Shakespeare could meet for lunch and discuss the evolution of their languages, the latter would have the upper hand when debating who has had more of a linguistic influence over the other. History cannot be reversed and as my Spanish grandfather used to say to my North American father, “if the Spanish Armada hadn’t lost to the English, you would be speaking Spanish now”.  Maybe. Hasta mañana! 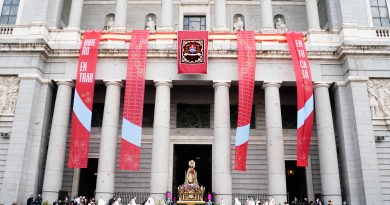 Madrid´s Feast Day – The Legend Of The Virgin Of Almudena 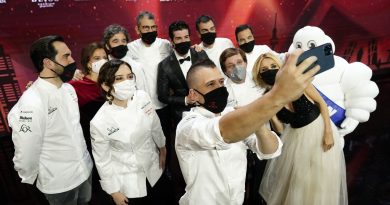 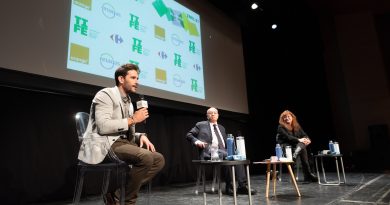