Skip to content
Living in Madrid What’s on in Madrid
February 2, 2019May 29, 2020 Madrid Metropolitan

Argentinian film director and screen writer Alejo Flah talks to Abi Clark about about his latest film and life in Madrid.

Born in Buenos Aires in 1977, Alejo was brought up in the trendy Palermo neighbourhood in the north of the city and now resides in Madrid where he has lived since arriving in the capital to write a TV series in 2002 and never left.  After studying film in Argentina Alejo began his career as a film editor enabling him to learn the language of cinema and quickly moved into the world of screen writing, his first project being Vientos de agua with the Oscar winning film director Juan José Campanella for ‘The secret in their eyes’. A 13 episode family saga series about the immigration from Spain to Argentina and vice versa over time. A 14 year old series which people still talk about today. He also wrote the script for the film ’Septima’ starring Ricardo David and Belen Rueda before embarking on the world of directing with his first film being ’Sexo facil, peliculas tristes’ with a Spanish and Argentinian cast, it was filmed during 3 weeks in Buenos Aires and 3 weeks in Madrid  “a film which brings the 2 cities together on the big screen,” explains Alejo. He also wrote the script for the film ’La adopcion’ in 2016.

We asked Alejo about what keeps him here in Spain after 17 years and he explained that one of the things that he loves about Madrid is that it is a city with people from all over, “it’s a very open city where it is very easy to feel part of it and also all the people are in the street in the bars and walking around.” 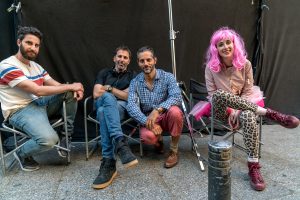 We asked him to choose a favourite corner of Madrid but he felt that it is not easy to choose just one and explained “there are lot of places that I like, the parque oeste, conde duque, la latina and Vistillas, as it is not as crowded as La latina and it´s a great part of the city”. There is one small hidden treasure which he shared with us; the gardens of Prince Anglona near La latina on Paja square.  And a favourite restaurant? “Not easy to choose one restaurant but I like the cajita de nori on guardias de corps plaza in conde duque.”  He also mentioned the Mercado de cebada, since 1875 and one of the largest food markets in Madrid, that has Peruvian restaurants and different latin food. “Also Naomi the first Japanese restaurant in Madrid,” he added. This successful Japanese restaurant located on 14 Avila street opened its doors in 1974, no less than 44 years ago.

His favourite cultural place in Madrid?  “El cine doré or The Filmoteca where everyday you can watch 3 or 4 feature films from different periods, it´s a great place, a very beautiful cinema with a lot of very good options to learn about film history and to discover very good movies from all over the world.” The Doré cinema is situated on 3 Santa Isabel street in Embajadores.

How about a favourite song which for you symbolises Madrid?  “Los planetas have a song called ‘un buen día’ (One good day) and it’s a very good way to define for me what one Sunday in Madrid or one Sunday in any city of Spain as that song was actually written in Granada, but I really like the song and the lyrics as they talk about one Sunday in the city.”

What are the main differences between Spain and Argentina? Alejo explained that in Argentina there is a lot of immigration from Spain, mostly from Galicia y Andalusia “so the people aren’t very different although maybe we have more similarities with the Italian people because there was more immigration from there than from Spain but the people here are very similar so it is easy for the Argentina people to live in Spain and also for the Spanish people to live in Argentina”.

Alejo is currently in Seville doing the colour grading of his latest feature film called ´Taxi to Gibraltar´ with actors Dani Rovira and Joaquín Furriel de argentina y Ingrid García, an Antena 3 and La terraza production and co production with Argentina and La Zanfoña in Seville, after the colour grading they will do the sound mixing the vfx which should be completed by January.  It will premier on March 15th.

When interviewed following the release of his film Sexo facil películas tristes Alejo told the cinema blog Espinoff  Why is not my life like in the movies? And in romantic comedies a lot more, why are not my love stories like in romantic comedies? And I explain that it came out in a natural way to play with this idea of ​​love in reality and love in a romantic comedy and see what happens in both cases.