Last Saturday night I headed to the horse racing at the Hipódromo de la Zarzuela for the first of several special events celebrating 100 years of GP in Madrid. On arrival I was immediately in awe of the simplistic modernist style of main stands that overlook the pristinely kept racetrack turf. After grabbing a drink at one of the many outdoor bars I headed to place a bet on the first race.

I have never been too concerned with form and have always chosen my horses on names, which was easy using the well designed free programme on offer. There were more than enough places to place your bets and the atmosphere was a lot more relaxed than the pre-race craziness in thr UK. I wore a full suit but quickly realised I was overdressed as the only other person I saw wearing a tie was a horse owner, surveying his horse along with the punters as they were paraded around the paddock before the first race. 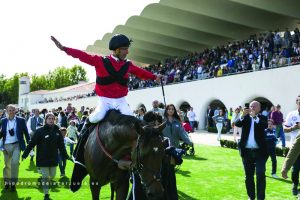 As a song played to signal the start of the first race, spectators headed to a variety of different spots to watch the action begin. Being English, I opted for the shaded area of one of the 3 main stands as the temperature remained high throughout the Spanish spring evening (similar to a hot British summers day!). You get a real sense of stepping back in time, the 1930s style stand presenting the perfect raised view of the sun drenched racetrack as the horses shot out of the starting gate to the cheers of the expectant crowd of all ages.

Those who don’t have binoculars can watch the action on a big screen just behind the track as they wait for their horses to come down the final furlong in front of them. If like me you are lucky enough to pick a winner, you get to watch your horse and jockey celebrate in the winners circle. Throughout the night there were 6 races, varying in length from 1,100m to 2300m, the highlight being a 1,100 sprint won by Borja Fayos on Antonella who showboated by standing on his horse as he headed to collect his trophy and the highest prize money of the night.

If not claiming your winnings or choosing your next horse in between races there are a wide selection of food trucks offering food from all over the world and bars to help you spend your winnings or to drown your sorrows. Those wishing to expand their summer wardrobes can also browse a selection of eclectic clothes stands with chilled house music playing in the background.

Just as the sun had set on the final race, the evening entertainment got underway with a mesmerising performance by Santo Serra, aka the Spanish horse whisperer. He had the crowd in the palm of his hand as he got his Arabian horses performing tricks to the mesmerised audience. After he had enthralled the crowd everyone headed to a Flamenco music concert and those who had the stamina danced to 80s and 90s hits performed by ‘The Today Band’ till well after midnight.

Whether you want a fun family day out or a different experience with a group of friends I would highly recommend a day out at the Hipódromo, especially during one of this year’s special events, where you can enjoy a relaxed evening of racing and entertainment without the pomp and stuffiness sometimes associated with the races in the UK.

WHEN TO GO
Race meetings are every Thursday night throughout July and until 8th August. There’s then a break and in September from the 15th the racetimes change to being every Sunday morning instead. All the information can be found on www.hipodromodelazarzuela.es