The author Peter Besas whose widely acclaimed “Hidden Madrid ” series of books talks to the Madrid Metropolitan about some of Madrid´s best kept secrets.

There’s a tavern in Madrid called “El Madroño” on the Plaza de Puerta Cerrada 7, where on the wall, behind the counter, you’ll find an extensive explanation, including various painted tiles, tracing the evolution of Madrid’s coats-of-arms. While you’re there, order their home-made madroño liqueur served in glass made from an edible wafer, quite a delicacy, or buy an entire bottle. If only Carlos V had been able to get his hands on this!

Also, should you be interested in seeing an actual madroño tree, head down the Calle Mayor past the Plaza Mayor. Most of the trees planted on both sides of the street are madroños. The ones on the corner of Calle de los Milaneses are clearly marked as such with a plaque. More madroños can be found in the Retiro Park, on the corner of the Paseo del Duque Fernán Núñez and the Paseo de Uruguay, next to the Rose Garden.

A ROMAN SIESTA IN MADRID 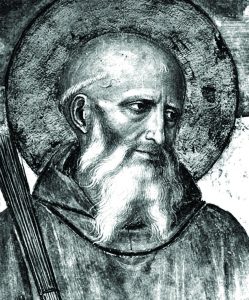 Curiously, the origin of the word siesta, thought of as being so typically Spanish, actually harks back to ancient Roman times. It refers to the “sixth hour” or sexta hora. This, in the Roman daily timetable of 12 daytime and 12 nighttime hours, corresponded roughly to our lunchtime (11:15 a.m. – 12:00 in winter, and 10:44 a.m. – 12:00 in summer). The ninth hour of the day, nona, from which our “noon” was derived, is actually a misnomer since it originally came after noon, anywhere from 1:29 to 3:46 p.m.

In the Sixth Century, Saint Benedict, strongly feeling that only when the day was properly ordered would the monks in his monastery be able to perform the tasks required to serve God, even instructed his underlings to build clocks to count the hours in order to guide them in their duties. Benedict adapted the Roman timetable and set up a rule whereby at certain hours the monks would be required to work, to pray or to stop for meals and rest. All these were part of the daily routine. Among the time divisions, the sexta corresponded to midday and was the hour in Benedictine monasteries set aside for rest, many times including a short snooze, in other words, a siesta. 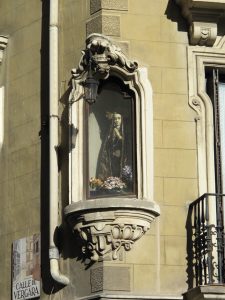 Don’t miss seeing what is probably the last of the “corner Madonnas” in the city. It is an ornate statue found in a niche in a building on the corner of the Plaza de Ramales and the Calle de Vergara. These Madonnas were traditionally placed on the outsides of buildings and over doorways by the faithful in thanks for having their prayers answered, or even just as a sign of piety. This Holy Virgin is known as “La Dolorosa”. Many such images can still be seen in Andalusian cities and other parts of Spain, but virtually non survive in Madrid.

The ground floor of the house is taken up by the Café de las Austrias, a pleasant stopping-off place for a coffee, a drink or even a meal. We might also mention that it was on this square that on July 29, 1994 the Basque terrorist organization ETA set off a bomb in which three people lost their lives and damage was done to some of the buildings. Curiously, the corner Madonna remained unharmed, other than the glass protecting it on the outside, which was soon replaced. 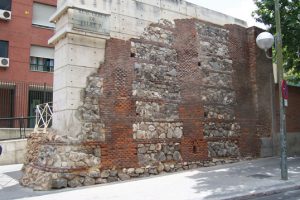 Should you want to hunt down other remnants of the old city walls, head over to the Ronda de Segovia 95 (near the Puerta de Toledo) where you’ll find a sizeable remaining chunk of what was known as the Cerca de Felipe IV (Felipe IV’s Enclosing Wall). As the city grew and started to sprawl over areas beyond the old Christian and Moorish walls, the king realized that a new enclosing wall was needed, not for defensive purposes, but so as not to leave Madrid open for anyone and everyone to come into and leave at will. With such a new wall, traffic would be properly controlled, transit taxes collected and miscreants and carriers of diseases better barred. Hence in 1625 Felipe IV had a wall built made of brick and mud that remained in situ as late as 1868. By that time, the city had again expanded far beyond it and thus made its existence unnecessary. In fact, the perimeter of that wall in modern Madrid is where the present rondas and bulevares form what may be considered the first “ring road” of the capital. 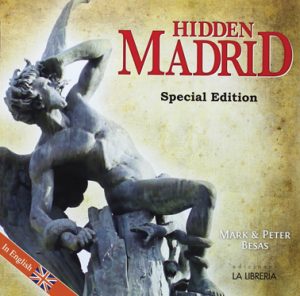 Hidden Madrid is on sale at all major bookshops in Madrid, including El Corte Inglés, FNAC and the Casa de Libro. These and hundreds of other books about Madrid are also available at the publisher´s bookshop, Ediciones La Libreria, located on the Calle Mayor 80.