It is said that Madrid has more bars than any other city in Europe and I have often wondered how that many can possibly survive. The answer I assume must partly be that Madrileños are a sociable lot who meet out more than entertain in. The aperitivo is a firm fixture any day of the week and they do seem to spend a lot of time in one bar or another. On the other hand if bar owners are supposed to provide a tapa or two with every drink ordered the  economics become even more blurry. Or so it would seem. 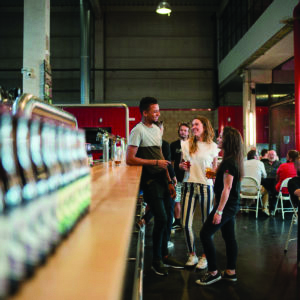 When I arrived in Madrid  five short months ago and was given a plate of crisps (I thought it was great). Coming from the UK the idea that you might be given anything for free was a pleasant surprise. After a little while I realised my fellow patrons where being given considerably better tapas and bigger portions –  they had croquetas and tortilla and other goodies and I was always with the crisps – could it be that this was because they thought I was a tourist and were waiting for me to order from the tourist “ tapas menu”? As a newcomer to Madrid who apart from everything else ( language/culture etc) just didn’t know where to begin other than to accept what had been given when I went out in the centre of town and I made it my challenge to overcome this.

I had earlier set up my own facebook group to get opinions and insights to the gastronomic heart of Madrid and I reached out to them to find out their views and it was a common view that many places in the centre saw them as tourists who didn’t warrant their complimentary fayre. That and an inability to breach the language barrier and just as importantly the tone in which it is spoken appeared to be the main issues to face and to do so head on! I asked the group for some recommendations of where to head to and I set out to integrate myself as a local  albeit with my then limited Spanish. I set to work.

After visiting many suggested places, I decided on four must-visit eateries for the best free tapas within walking distance of each other to make a nice paseo any time of the day!
La Tintoreria – Calle Espoz y Mina 19
A modern-twist on a traditional Spanish restaurant and bar offering a variety dishes in an inviting and comfortable environment. You will expect to receive dishes such huevos rotos, pinchos de lomo amongst many others made freshly that day.
Matador – Calle de la Cruz 39
If you like Jamón then this is your place. Without a kitchen on site, all of their tapas is prepared at home including their Tortilla. Enjoy freshly sliced Serrano ham from one of their many hanging cured legs along with cheeses and other cuts of cold meat with your drink.
Toma Jamon – Calle de Cava Baja 10
Located on a popular street of bars, this place has certainly some competition. However when you are greeted  with a smile and given dishes such as pimientos de pardron and tortilla with your drink in a relaxing environment, you know you made the right decision.
El Anciano Rey De Vinos – Calle de Bailén 19
If you like the idea of choosing which aperitivo you would like to have with your drink, then this is perfect choice. Located opposite the Almundena Cathedral, you might expect that this would be full of tourists – you could not be further from the truth. Fourth generation owners have kept this place in line with its roots offering an abundance of options including boquerones and mejillones to name but a few. 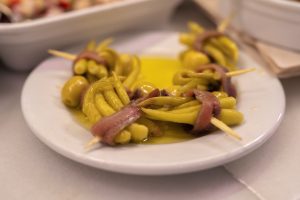 1. You order a drink in a bar and you are not given anything to accompany your drink: ¡Perdona! ¿Podrías traerme algo de picar? (Excuse me, could you bring something to nibble?)

●    Try to avoid busy times.
●    Stay away from tourist areas
●    Order a caña instead of a jarra (You will finish a caña quickly and more likely to order another!)
●    Always wait for your drink and tapa to arrive before ordering any food off the menu.
●    Do not be afraid to ask.
●    Create relationships with your favourite places, trust me they will remember you!