A FIVE-DAY FEAST FOR THE EYES – REVIVING THE FOLKLORE FROM MADRID
“The faithful seek him everywhere whilst the fair-sex pin their faith on a suitor.” A bystander. 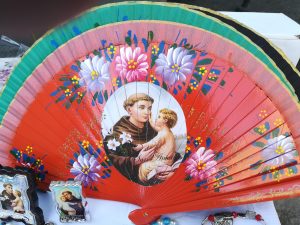 Fernando Martins de Bulhöes (1195,1231), later to be known as St. Anthony (the name he adopted from St. Anthony of Egypt (the first venerated Christian monk to dwell and seek spirituality in the wilderness) who became a universal saint in a short span of life.

The calling came at the tender age of 15 when Anthony joined the Monastery of the Holy Cross in Coimbra, the then capital of Portugal in 1210. The young man studied Theology and Latin.
He was prodigious and gifted with a powerful memory.
Anthony befriended some Franciscan friends who lived in a small colony in Olivias in Coimbra and joined their order.

Next Anthony set sail for Morocco. In the land of the Saracens he was struck down with a
serious illness and returned home. But it was meant to be otherwise. Contrary winds deflected the vessel from its intended course and Anthony reached Sicily. In the friary he was nursed back to health by the Franciscan brothers. Eventually due to his illness he had to abandon missionary work and take up tutoring. His new post took him to Montpellier, Toulouse and Arles in France.

Later on he came in contact with St. Francis of Assisi and the latter became his mentor.
Eventually Anthony gained self-confidence. Anthony had the gift of the garb and spellbound the audience. His speeches were injected with power, wisdom and depth. His vast knowledge of the Scriptures acquired during his years as an Augustin Friar was overwhelming. Akin to St. Francisco de Assisi St. Anthony of Padua possessed an undying love and devotion for the impoverished.

Wherever he went he drew huge crowds (30,000) and he was indeed a tireless traveller having made 400 trips during his lifetime. Pope Pius XII declared Anthony a Doctor of the Church in January 1946. Though Anthony was struck down in his prime of youth he managed to exceed his expectations. And his fame and message spread world-wide and the day is celebrated all over the globe. 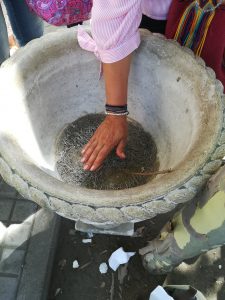 PINING FOR LOVE AMIDST THE FIESTA
The ritual of the pins dates back to the 19 th century when seamstresses set the trend desperately seeking suitable suitors. A ritual was introduced. The lady pitches thirteen pins into the baptismal font. Then she bends down and gently presses her palm on the metallic objects. The number of pins hanging loosely on her palm determines the number of sweethearts for the whole year.

Yours truly spots two familiar faces amongst the seekers of true love – Stunning Marina and charming Fabiola – enterprising owners of ´The Modistillas ´ based on Luna street in the Malasaña vicinity. Of late the altering business run by enterprising women have shot up like
mushrooms all over the city.

“Well! Well! Well! Look who´s at the fair!!”
“Hola!” they greet me in unison.
“You two, once again!”
“Seeking love desperately?”
“Yes,” remarks Fabiola with a megawatt smile.
“And for work in this time of crisis.” adds Marina grinning like a Siamese cat.
“We sure are born lucky. We are really busy around the clock.”
“Lots of luck to the assiduous romantic girls.”
So in these days of fiesta we have St. Anthony at the helm to lend the unemployed a helping
hand. Felices fiestas!

THE MOTIVE CONSECRATED BREAD IS DISTRIBUTED
In 1213 a woman sent an urgent appeal to St. Anthony. Her loving boy had drowned. She
promised to donate an amount of corn equivalent to the weight of her son Her wish was
granted instantly. Thus the distribution of the bread came into being. St. Anthony is invoked for lost property. He is the Patron saint of snail mail. In Tamil Nadu (Southern India) a wooden statue honours the spot where he is said to have cured an entire crew of a Portuguese vessel. Incidentally, Saint Anthony is known as The Miracle Saint in this leafy region. 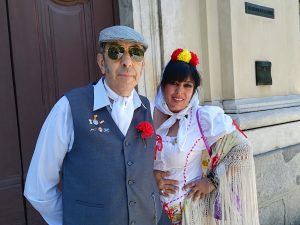 HIGHLIGHTS OF THE FAIR
High mass.
The distribution of the consecrated bread.
Free entrance to Real Ermita de San Antonio de la Florida – the life and times of Francisco de
Goya. Worth viewing the frescos on the multi-coloured ceiling.
Dance competitions.

VOCABULARY RELATED TO THE FIESTA
ARRARAS – Coins handed to the bride by the bridegroom as a token of affection and fidelity.
BATICADA –a high-pitched tom-tom -a medium sized drum – played with a single stick or two long sticks and the hand.
MERENDERO -Open air café, snack bar, picnic spot normally at the Plaza de San Pol de Mar.
MODISTILLAS – seamstresses
ORGANILLO – barrel organ.
ORGANILLERO – Organ grinder – a person who plays the organillo.
VERBANA- An open air celebration on the eve of a saint´s day.