Sanchez said that “the hardest part is over,” and that “we are seeing light at the end of the tunnel”. He praised the Spanish people for their response to the crisis saying they had been “formidable” and that “everyone has fulfilled their mission and they came together to deal with the epidemic.” 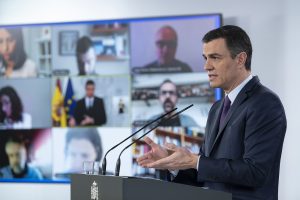 The 11 remaining matches will be held in empty stadiums. Barcelona currently has a 2 point lead over Real Madrid with 27 games played apiece.

No specific details were given for the return of tourism which is one of the key engines of the Spanish economy contributing 12% of national GDP.

Presently Spain has a 14 day quarantine on new arrivals to the country.

Under the government´s 4 phase de-escalation plan to return to the “new normaility”  travelers are still not allowed to travel between provinces or communidades.

The government will announce the commencement of an official period of national mourning to last 10 days.