The centre of Madrid was brought to a halt on Saturday by VOX protestors in their vehicles waiving Spanish flags and calling for the PSOE led government to resign ofver their handling of the coronavirus crisis.

Vox leader Santiago Abascal, addressed the demonstrators on EsRadio whilst being on a double decker bus so that they could listen to him from their vehicles. 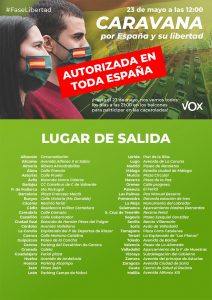 “I’m excited to talk to you, but i’m not surprised,” he said. “Spaniards always turn out at decisive moments. We are here to defend our freedom. The threat to the freedom of Spain is being led by an illegitimate government that has become a criminal government, one that is incapable of protecting its people and is directly responsible for the worst management of this crisis on the whole planet.

“Let us never forget what they have done to us,” he continued. “Have no doubt that we will take them to the courts. They know it and they are afraid of your freedom, which is why they are trying to intimidate us.”

Abascal went on to say that the minority PSOE led coalition government is trampling on  “the rights of Spaniards” but that ” Spain will prevail.”