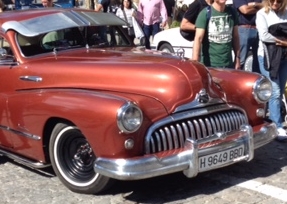 SO you have a 25 year old clapped out banger, a money-pit rust bucket held together by string and a prayer – congratulations you have a ‘classic car’.

BUT a true classic car buff has a nostalgic piece of art, memories of past youth, swooned over, meticulously maintained, washed, waxed and polished and taking pride of place in the stable of family possessions.

What car cannot turn heads as much as a 1960’s Jaguar E-Type, hood down, purring and burbling through open country lanes? Enzio Ferrari when he first saw the car launched at the Genova Exhibition in 1961 declared it the ‘most beautiful car in the world’. Ettore Bugatti, another Italian maker of exotic cars, also referred to another icon – the racing Bentleys of the 1930’s – to be the ‘fastest lorries in the world’. Two classic British marks that stamped their fame on the World stage and over the epoch of these times the birth of the Classic Car scene.

Definition of a classic car. The usually recognised norm is a car that is 25 years and older.

Without any doubt the UK dominates the classic car scene both throughout Europe and the World with some of the largest active classic clubs; owners, enthusiasts and thousands of myriad specialist companies carrying out restoration, maintenance, spare parts suppliers, auctions, events race organisations and not a week goes by without some meeting of classic car buffs showing off their treasures.

AND that is what it’s really all about: showing off of your pride and joy and meeting with fellow enthusiasts. The problem is that within the ‘Comunidad’ of Madrid there is a dearth of regular events where you, your car and particularly the general public can go and enjoy. There are the occasional annual classic car events, there is one held in February at the Pabellón de Cristal in the Casa del Campo and various irregular one-off events in some of the outlying’ Pueblos’. There are also classic car clubs for specific makes: Jaguar, MG, Triumph, Alfa Romeo, Mercedes, Porsche and even Rolls Royce, but these are member organisations and somewhat insular and not shared by the general public.

HOWEVER, there is one jewel of a place on our doorstep and that jewel is Navacerrada, a picturesque village nestling in the south facing slopes of the Sierra Guadarrama. Unspoilt by the spread of expanding urbanisations and well known for its excellent Asador restaurants and rustic bars. A haven for skiers in the winter season and now a haven for classis car enthusiasts.

Ricardo Conesa is the organiser and on the first Sunday of every month stages a meeting point for classis cars of all makes and models, European and American and some going back to the early 1930’s. The centre of the village is closed off to all other forms of traffic, the cars are parked in battery to increase the numbers, viewing access and inspection and the public enjoys a cornucopia of nostalgia. The event was started some 14 years ago and the village also shares with an open air flea market which together attracts thousands for a family day out in the countryside.

Sit down on one of the many terrace bars in the centre and if you are eagle-eyed you may spot the odd yellow arrow painted on posts and on street corners. These are the pointers for pilgrims taking the route from Madrid on the Çamino de Santiago. The village is a welcoming rest-point for travellers on the Manzanares to Cercedilla stage before the next stage over the Sierra to Segovia. Brings back memories for I did this Camino a few years ago.

My ‘capricho’ is my classic car, a sapphire blue Jaguar convertible and regularly attend the first Sunday of the month event. So all you classic car buffs and enthusiasts out there come and join me, bring the family and have a wonderful day out!