For the fifth consecutive year, Madrid celebrates the Chinese New Year which for 2020 signals the start to the Year of the Rat beginning on the 25th January. 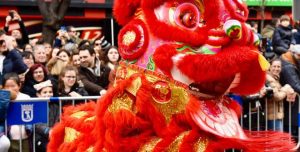 As in previous years the Madrid district of Usera will hold a  street parade on the 26th January.

The celebration of the Chinese New Year, which dates back more than 4,000 years, coincides with the beginning of the crop cycle, bids farewell to winter and welcomes a new season, so it is also known as the “Spring Festival”.

Usera, the heart of the Chinese Community

The main venue will be the marquee in the square of Usera District Council where the Year of the Rat Stage will be located, which will be visited by the influencer, Yon Li, on the 24th, who will organise a very special party, the Night Rats (7pm to 10pm), in which the trap singers,  Yowaii and Lowelto and Putochinomaricón will participate.

The stylist, Antonio Mahugo, will also be there (from 7pm to 9pm) offering hairstyles and make-up so that everybody looks perfect.  On the same day and on Saturday 25th, a karaoke will be set up with a wide variety of songs in Chinese and in Spanish.

The entire square will be decorated, inspired by some famous Chinese neighbourhoods, such as those in Manhattan, San Francisco or London, with decorations and structures that imitate traditional architecture. It will be a Little Chinatown, where we will be able to see two sculptures, the Fat Women by the maestro, Xu Hongfei, which sculpts scenes from everyday life with a humoristic language. There will be others by the same creator all around the city (Conde Duque, Matadero Madrid, Quinta de los Molinos, etc.) until 12 February

There will be many things to see: luminous pandas, a wall to write wishes on, a photocall and a small marquee where costumes from ancient China can be tried on. During the festivities, the programme in the square will be continuous, with concerts (Yo soy Ratón -S25 11.30am-, Chinese pop and rock with Sghenmi and GAS -S25 5 – 7pm-, calligraphy exhibitions, workshops, storytelling, table-tennis competition (S25 11.30am to 5pm) and a football masterclass (S25 11am – 2pm) and a Chinese shadow theatre (S25 12 Noon -2pm and 4 – 6pm at the José Hierro Library). There will also be guided walks through the neighbourhood and exhibitions at the headquarters of the Council (from 24 Jan to 12 Feb): one on animals of the Chinese horoscope and another on the work of the Chinese painter, Dan Nan.

Multicultural Parade and the Light Festival

One of the most awaited moments for residents and visitors who celebrate the Chinese New Year is the Multicultural Parade (Sunday 26 January 2020 from 11am to 1pm) which goes through the main streets of Usera (Route: Departs from c/ Marcelo Usera on the corner of c/ Olvido – Av. De Rafaela Ibarra – c/ Dolores Barranco).

More than 1,000 artists will participate in this parade, which will fill the neighbourhood with magic, costumes brought from China, dragons and giant lions, iconographic elements from China, lanterns made by children and live music.

At the end of the parade (1.30pm), a acrobatic circus will perform a show with different circus disciplines in Olof Palme Park, which will delight people of all ages thanks to the technical difficulty of the acrobatics, juggling, dance, contortion, impossible balancing acts.