This is the moment a matador has his leg impaled by a huge bull’s horn after it gored him as he went to kill the animal with a sword. 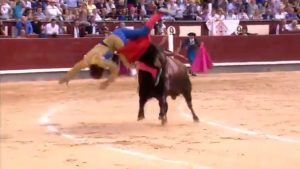 The shocking was recorded at the Las Ventas bullring in the Spanish capital Madrid as matador Roman Collado, 26, was fighting a bull called Santanero.

Local media report Collado was trying to kill the bull in front of the spectators to end the spectacle when he misjudged and the animal gored his right thigh.

In the video, Collado can be seen facing the black bull with his red cape and sword in hand.

The matador then tries to distract the bull with the cape and drive the sword into its neck but he misjudges and the bull rams into him with his its horns. It reportedly died later.

The bull’s horn impales Collado’s right thigh and the huge animal then begins thrashing, sending Collado into the air and crashing to the ground before assistants manage to run in and distract the animal.

The assistants then lift Collado off the ground and carry him into the centre of the ring as the bull is distracted.

Reports state the inside of the matador’s right thigh was impaled by the horn and he has undergone two operations after severing his femoral artery.

Rafael Garcia Garrido, one of his representatives, said he is still in the intensive care unit but is “cheerful” after undergoing the emergency operations. He was reportedly left with a 30-centimetre (12-inch) wound to his thigh.

Collado had replaced Emilio De Justo in the fight as the latter was injured at a bullfighting event in Caceres, also in Spain.