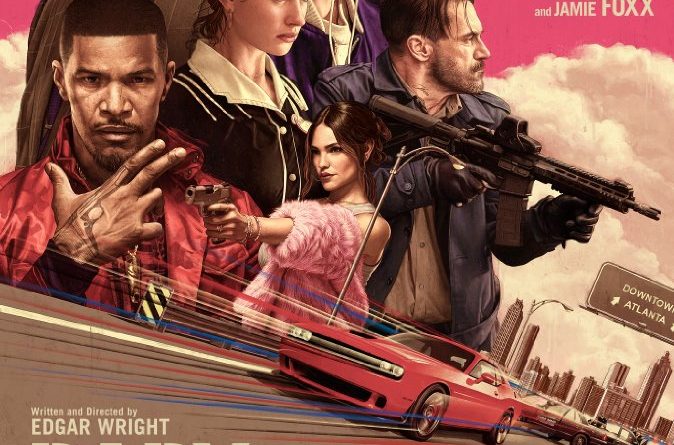 Welcome along! We are now into the summer proper, gingerly walking on the shady side of the street and spending our weekends dangling our legs into a swimming pool. When you do venture out at night be sure to check out the cinema. Tent pole flicks are upon us and some big fish are landing on our screens. This summer we have the chance to see another incarnation of Spiderman and the third in the simian, dystopian Planet of the Apes is here. We have a hotly-anticipated Stephen King adaptation, ancient British legend and Winston Churchill on screen – chomping on a cigar and preparing for battle. We are treated to a couple of very different but equally promising movies from two of the best Brit directors out there. So, settle down with your pink slushy for the pick of the summer.

First, on the 7th of July is Baby Driver, which comes from the forever percolating imagination of Edgar Wright (Shaun of the Dead, Scott Pilgrim). I’ve been looking forward to this for ages and it’s gained rave reviews – including a 13 tweet love letter from Guillermo del Toro. The movie takes the brio of a finely soundtracked car chase and turns it into something poetic, balletic – full of zip – clearly made with the abandoned pure joy of a fan. Ansel Elgort is Baby, the relative newcomer under the sunglasses and behind the wheel in this heist thriller with a pulse. Jamie Foxx, Kevin Spacey and John Hamm also star. See it. It should be one of the highlights of the summer.

Also on the 7th is another movie much praised at the moment. It Comes at Night is a horror film that shows how paranoid survivalist instincts turn people into predators. Perhaps nightfall brings nightmares that lurk within us all the time? Shot in the vast solitude of the American woods this looks to be a finely-crafted chiller. Joel Edgerton is the man, haunted, and haunting.

Mark Wahlberg reteams with director Peter Berg (after the brilliantly harrowing Lone Surivor) for a movie based around the events of the Boston marathon in 2013. Wahlberg’s Sergeant Saunders is at the scene of the bombing and the film shows how Boston reacted to the events. Offering stellar support are Michelle Monaghan, Kevin Bacon, John Goodman and JK Simmons. Also out on the 7th.

The third in the new Apes franchise, War of the Planet of the Apes comes to our screens on the 14th of July. The previous two instalments were unexpected hits that revived a much loved classic idea in film. With themes of prejudice, motive, survival, hierarchy, these movies have become as thought-provoking as they are entertaining and this one looks to be no different. As the title suggests, the apes’ society is riven with infighting and outside threats that threaten its very survival. Expect brutality and excellent motion capture performances.

On the 21st Scarlett Johansson and co are throwing back the shots on a bachelorette party when things go a little south. Johansson, Joined by Kate MacKinnon and a cast of female US comic talent venture out on what will become, as the title suggests, a rough night. The movie follows the ladies as things get totally out of hand. Looks like a lot of bonkers fun.

Out on the same day is Christopher Nolan’s Dunkirk. Nolan (Inception, The Dark Knight) who hasn’t put a cinematic foot wrong in his career, brings us the true story of the evacuation of the allied forces from the beaches at Dunkirk in 1940. It looks sensational: harrowing, thrilling, emotional, stately – the film reteams Nolan with Cillian Murphy and Bane himself – Tom Hardy, here playing a fighter pilot, and The great Hans Zimmer providing the kind of stirring score that has become his trademark. Also starring are Mark Rylance and Kenneth Branagh, as well as – in his film debut – 1D’s Harry Styles. See it on the biggest screen you can find. The director’s first war film will be a highlight of the summer.

Spiderman swings back into action on the 28th. This recent iteration of the character played by Tom Holland has got largely positive reviews from comic book fans and critics alike. Spidey gets his inevitable origin story, taking in his dorky high school pals and the early forays into foolhardy vigilante neighbourhood watch. Marvel movies being the wisecracking yin to DC’s stonefaced yang, Holland’s Peter Parker fits right in with the tone set by Robert Downey Jr’s Tony Stark. It should be a lot of fun.
Into August and we have Atomic Blonde on the 4th. Charlize Theron, newly-minted after her superb turn in Mad Max a couple of years back, gets the chance to throw some Eastern European guys out of a window in what looks like a super stylish action movie. Fine support comes from James McAvoy, Sofia Boutella, John Goodman, Eddie Marsan and Toby Jones.

Arriving on the 11th, although laden with the baggage of poor to mixed reviews in the UK comes Guy Ritchie’s King Arthur. The mythical, ancient Briton is given the full vigour of a Ritchie sheen and stars, in a small role, former Real Madrid player and aspiring thesp, David Beckham. Jude law and Charlie Hunnan star.
A Stephen King adaptation is often troubled – overshadowed by the great writer’s scope and the intricacies of his plots – usually resulting in adjectives like ‘unfilmable’ being tossed around. Happily, The Dark Tower arrives looking much like fans of King’s might hope. Idris Elba and Matthew McConaughey play manifestations of justice and malevolence in a parallel world that might encroach on our own. Fans of fantasy and action adventure will find plenty to love in the Dark Tower. Out on August 18th.
The following week (25/8) comes The Hitman’s Bodyguard which promises to be a richly-daft action/buddy comedy. Well-chosen comic pairing Samuel L Jackson and Ryan Reynolds are the duo spitting machine gun profanities while on the run: from each other, from the police and from master criminals. The trailer promises violent slapstick and some really funny gags. Salma Hayek and Gary Oldman bring chewy eccentricity, further seasoning the chaos.

Winston Churchill’s life could fill a trilogy of biopics. For example, just a taste of what he achieved: he was an MP for over 50 years, prime minister twice, winner of the Nobel prize for literature and made an honorary US citizen. Here, another actor has a bash at portraying the great man in a film simply titled Churchill. Brian Cox (not the physicist) masters the tics and the Winston grumble in a film that concentrates on the eve of the Normandy invasion in 1944. Churchill, by now burnt out by the war, with a country worn out by bombs and rationing, confides in his wife and steals himself for one, hopefully last, decisive assault on Nazi soldiers occupying France. The events are rich with intrigue and suspense and Churchill looks to be a decent dramatic portrayal of events.

So, lots to see. Enjoy your summer. Stay cool and I’ll see you in September.

For a complete list of the latest VO movies in Madrid see:
https://www.angloinfo.com/madrid/events/movies