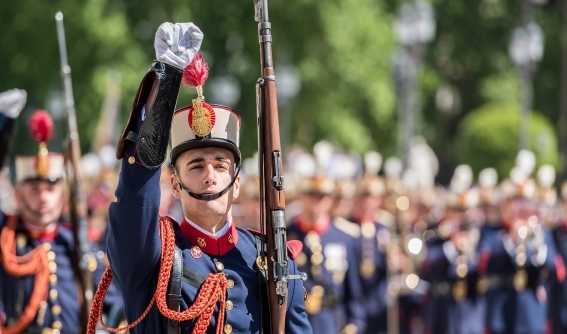 Changing of the Guard at the Royal Palace

In July, the Royal Guards move to their summer timetable, with the Changing of the Guard now taking place every 30 minutes between 10:00 and 12:00, every Saturday and Wednesday. Always popular with the crowds, arrive at the Puerte del Principe early to witness a 20-strong troop of guards as they move in formation to the sound of the fife and drum.

Running throughout July and August, Madrid’s most inclusive culture festival returns with a programme of 90, largely free, concerts and activities, now extended to cover all 21 of its districts.
From world music and alternative indie rock, to opera, theatre, dance and hip-hop, there is something for almost everyone.
Among the many free musical highlights on offer, the 12 July sees the Spanish National Choir performing Carl Orff’s Carmina Burana in Plaza Mayor. There are also four Valadas de Circo (evenings of circus) in various locations around the city, and two nights of puppetry in Retiro Park to choose from.
Most events take place in the early evening and in the open air, making it a great opportunity to get out and take advantage of the summer months. Download a programme and find out more on the Veranos de la Villa official website.

It is 80 years since Picasso’s Guernica was first shown in Paris. The Reina Sofia, its current home, is now marking that fact with this exhibition exploring the painting’s roots and imagery.
This collection of still lifes, interiors and portraits aims to trace a path to the artist’s famous and very public anti-war statement, by looking at his treatment of themes such as violence, sexuality and danger in the lead up to World War II.
The exhibition runs unti the 4th of September, and can be accessed as part of a ticket for General Admission.

Dance and opera enthusiasts alike might be excited to learn of Ballet Flamenco de Madrid’s new production, Carmen de Bizet, due to premiere on the 6 July.
This dance interpretation of a light opera classic incorporates live music and choreography from a 20-strong cast. A Cultural Association in its own right, Ballet Flamenco de Madrid is known for blurring the boundaries between traditional Spanish dance and more contemporary forms. Runs until 31 August.

Get Your Portrait Madrid!

From the 5 July until 31 August, visitors to Plaza Mayor may find themselves immortalised by two of Spain’s most important young portrait photographers as part of a project organised by PhotoEspaña. This is just one activity designed to mark the historic courtyard’s 400th Anniversary this year.
Other events this summer include speakers from the TedExMadridSalon, an art installation that uses bottles discarded in the square and, on the 21 July, a free live screening of Il Trovatore from the Barcelona Liceu.

See out the summer indie style with 18 hours of music and more at this well-established city centre outdoor festival. Running from midday on Saturday 9 September, until 6am the following day, the festival features some of the biggest names on the indie rock scene. UK artists include The Kooks, in their only visit to Spain this year, Franz Ferdinand, and a solo performance from Liam Gallagher.
Held in one of the city’s best connected outdoor spaces on the Complutense University Campus, various artists from across Europe and the United States will also attend, including New York rock band, Interpol, and the Seattle-based Band of Horses. Tickets are still available so don’t miss out.

Taking place a little under a month before the World Athletics Championships in London, sports fans won’t want to miss Madrid’s 35th annual Athletics Meeting, which promises to attract over 200 top international athletes, including the best from Spain.
Forming part of the IAAF World Challenge Meetings, this 3-hour event gives spectators an opportunity to support elite competitors on their road to London, as well as more active participants a chance to compete in the men’s and women’s 800m, 1000m and 1,500m Open Races.
All tickets are very reasonably price and available from the RFEA and Visit Madrid websites.

For a touch of class, the Zarzuela Hippodrome’s summer season of Thursday night races has started and will be running until 27 July. Starting at 10:15pm, racegoers can enjoy five race meets on the ground’s fibre track, not to mention DJ sets and cocktails under the stars.
More family friendly entertainment can found in the form of bouncy castles and pony rides for the kids plus a wide range of food stalls providing cuisine from all over the world.
There is parking for 2,500 vehicles at the grounds and also a free shuttle service, which leaves from Paseo Moret in front of the Moncloa transport hub.