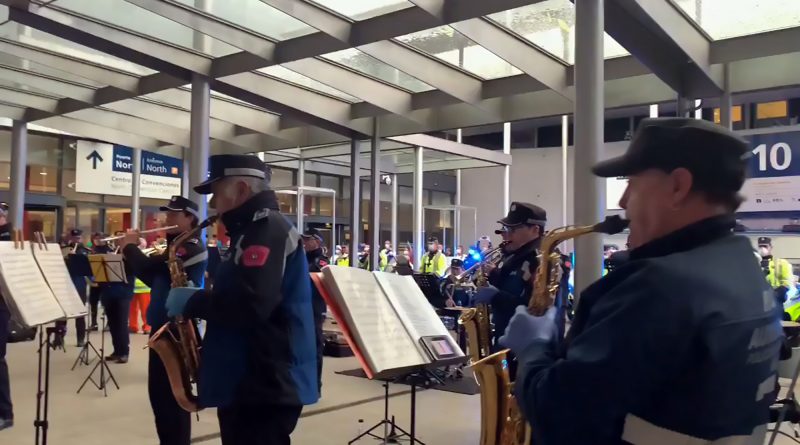 The Madrid Municipal police band honoured the medical workers in Spain’s largest makeshift coronavirus hospital in IFEMA for their tireless work by performing at the doors to the facility.

The touching moment was filmed in front of the IFEMA conference centre in the Spanish capital Madrid, which has been hospital turned into a hospital for coronavirus patients, on Tuesday 7th April – World Health Day.

The Madrid Municipal Police band gathered outside the makeshift medical centre to honour the staff inside.

The video shows the moment medical staff, police and government officials stand together clapping as someone can be heard yelling “bravo!” in the background.

The video also shows the moment band members play their instruments while standing at safe distances from each other while military personnel watch on next to them.

Medical staff smile, clap and even dance along to the music while others take the opportunity to film the moment with their phones.

The band played the traditional song from the city entitled ‘Madrid’ composed by Agustina Lara.

They also played ‘Resistire’ (I Will Resist) by Spanish band Duo Dinamico. It was released in 1988 and has become an anthem for hope during Spain’s coronavirus lockdown.

IFEMA posted a statement saying: “On World Health Day, the homage at 8 PM at the IFEMA Hospital was special.

“Thanks to the Madrid Municipal Police music band and everybody that works at IFEMA every day.

“Jose Luis Martinez-Almeida (Madrid’s Mayor) and Benoa Villacis (Madrid’s Vice-Mayor) have attended along with Eduardo Lopez-Puertas, General Director of IFEMA. We are all FEMA.”

The 8 PM homage refers to citizens all across Spain taking to their windows and balconies to applaud for several minutes in a show of gratitude to medical workers and authorities that continue to fight to contain COVID-19.

The IFEMA hospital was set up to avoid further congestion in public hospitals around the city.

Spain has been one of the hardest-hit countries by COVID-19. According to the latest figures by Johns Hopkins University Spain has 152,446 cases leading to 15,238 deaths.