From their peak a decade ago when the ” Irish theme pubs” were all the rage in every city on the planet and Madrid no exception,  today there remain the more authentic that have stood the changing tide of fashion and still fill a need for a decent pint. As part of our “Six Of The Best” Series we take a look at the best of Madrid.

Our Six Of The Best British & Irish Pubs are:

The Big Daddy of them all. The The Irish Rover is set over two floors with attentive bar staff under the watchful eye of manager Liz. Good selection of beers and pub grub in a cosy atmosphere. The pub is open from midday and shows all the major English premier league matches, Liga matches ( The Bernabeu Stadium is a neighbour) , Six Nations Rugby and American Football. It´s St Patrick´s Day Celebrations are legendary. Good mix of expats, tourists and locals make for a great atmosphere.  The Irish Rover has ample outside space ( terrazas) which is shaded and with cool spray sprinkling to keep you refreshed during the hot summer months.  Regular live music gigs and events thoughout the year.

British Madrileños David and Patrick set up the Oso Brewery Company making their own range of IPAs and largers for the Spanish market. They opened La Osita in 2019 selling their selection as well as a range of guest beers. Food served too and they have had a steady stream of foodie pop ups to go with their beers.  Vibrant expat crowd and Madrileños alike who share a love of good beer. Situated in the heart of La Latina. 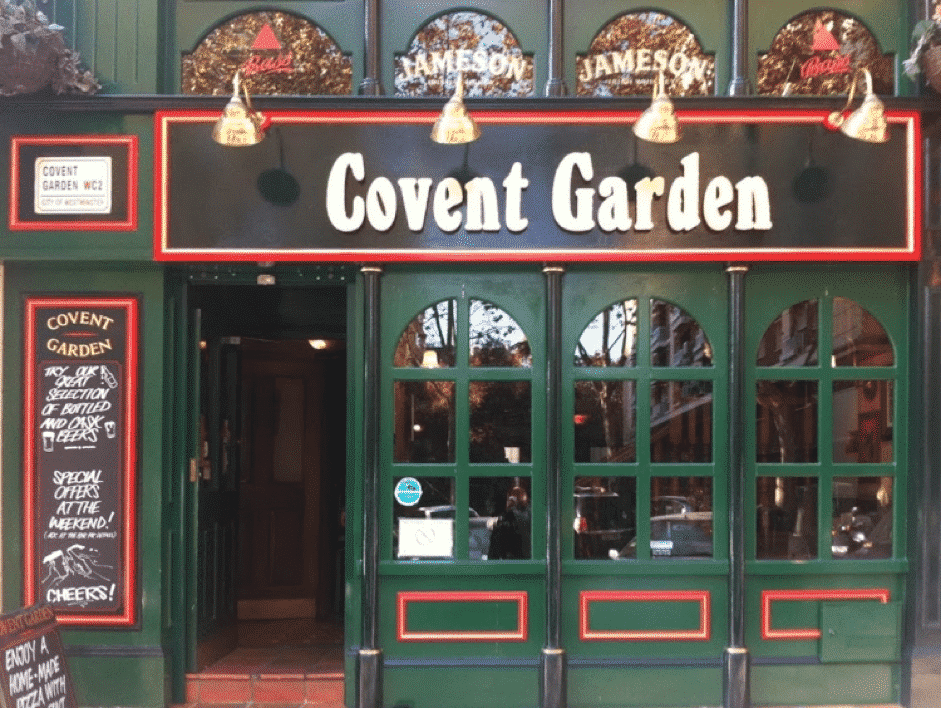 Long before the Irish themed pub became the rage of the 2000s in Madrid the Covent Garden Pub  had been offering an English equivalent. A huge range of Spanish and international beers both on tap and by the bottle. The pub now is a favourite for Madrileños of the area and offers a great food selection with their partnership of local restaurants – of which the institutional Alfredo’s Barbacoa burgers and ribs are a must.  Weekend live music and a great atmosphere every day.

Spanish owner Javier of the Cavern  knows his stuff and he sells a fine selection of international beers, IPAs and stouts ; lots to offer even the most demanding of real ale devotees. Plenty of excellent English bitters that makes the trip worthwhile including Bombardier and Charles Wells. A good central place to watch the football and rugby. Open from 5pm.

Situated close to the Plaza de Independencia , the  James Joyce  run by owner Matt has been serving the Madrid thirsty for decades. Previously Kitty O´Sheas and before that the much loved Café Lion the pub today combines the best of Spanish and Irish pub grub and its attentive staff serve a wide selection of on tap and bottled beers. The pub benefits from having spacious bar premises as well as outside terraza. Large screens for international sports ( including Gaelic football). Regular live music and plenty of activities including pub quizes and intercambio nights make this a lively most nights of the week.

A Madrid institution dating back to the late 18th century when this was a tavern. and named after a Pérez Galdos novel, the  Fontana De Oro has been run as an Irish one since 1994. Apparently the largest purchaser of Guiness in the capital. It´s central location on the corner of the Puerta del Sol make it a popular choice with tourists.  It serves food, has large screens for the sports and plenty of room on it´s two large floors including for concerts and live events. Considerable attention was paid to the decoration with much original woodwork made prominent.  A young and lively crowd. It´s late closing make popular alternative to the discos.