For the modern bourgeois, or maybe not so bourgeois, traveller there can be few greater horrors in modern life than flying. The emergence of cheap air travel has transformed our lives and enabled us to spread out across the globe and turn all those places we used to try to escape to into ever closer imitations of the places we were trying to escape from. A weekend break to Budapest has become as prosaic as a 1970s day at the seaside, while even in the most exotic of locations we find versions of ourselves everywhere, as well as prices that increasingly make us feel very much at home, as locals obey the first law of economics, which is to “always fleece the visitor.” Madrid is not immune from the ravages of EasyJet and Ryanair.  Visitors can now reassuringly find the same shops here as they can find everywhere else, and no trip to the Puerta del Sol is complete without a visit to the giant Apple Store where you can relax and mingle with the locals, as you sign up together to eternal corporate servitude. A wide range of fast food establishments are also busy putting traditional Spanish bars out of business as the citizens of Europe and the wider world, come together at the great global trough to enjoy a random selection of pale imitations of once proud local cuisines.

And of course you can now do all this in English. In fact, you have to. As a foreigner, you are an automatic target for a new generation of Spanish waiters anxious to practice their English speaking skills, with the hope of perhaps one day forming part of the flexible and fully mobile European workforce that has enabled so many young Spaniards to enjoy the experience of precarious low paid work in London and beyond.

But devastating as ubiquitous cheap air travel has been for the actual destinations, the horrors of globalisation pale into insignificance compared to the actual process of air transportation itself. Actually, the trip to and from the snappily named Adolfo Suarez Barajas Madrid International Airport is not bad if you go by metro. It’s fast and cheap, and certainly better value than the Gatwick Express where your wallet is primed on arrival in the UK for the torture that awaits once you actually get to London. Driving to Madrid airport though is another matter. Spanish road signs, junctions, and slip roads have traditionally been designed by sadistic halfwits to cause maximum confusion and hopefully the odd crash, but the signage to the airport is a particularly magnificent effort, a piece de resistance in the art of confusion. There is however, the option of the toll road, built specifically for the gullible, or those in desperate need of saving 30 seconds.

Once you are at the airport itself it’s the usual existential nightmare. If you are dropping someone off, or worse still waiting for someone, then the usual heavily armed Spanish police are on hand to force you into the carpark where will you meet armies of lost souls trying to work out how to pay (whatever you do, don’t follow the signs.) Then the usual fun and games ensue of trying to get away with hand luggage that cannot fit into the geometrically absurd sample containers that budget airlines have placed for your convenience so they can penalise you with a smile if you require more than a toothbrush for your travels. And then on to security where you will be stripped of all liquids, and of course of all human dignity.

Airports themselves are mere reflections of wider society, and Madrid is no exception. There are lots of shops for very rich people, and a Burger King for the plebs although the stylish and deeply confusing T4 has a McDonalds. In essence it is all a microcosm of the neo liberal nightmare. There are actually free water fountains but they have been set up with a flow so weak you would be better off sucking on a pebble. The inevitable thirst and frustration is of course, designed to force you into paying for the overpriced bottles of water available at multiple vending machines. Neo liberalism loves a consumer, particularly a trapped consumer suffering from dehydration. As you will have been panicked into arriving hours before your inevitably delayed flight you will have plenty of time to buy a couple of Hugo Boss shirts, a Burberry scarf, or a few of bottles of Chanel Bleu and single malt Scotch.  If you are a pleb then you can satiate your lust for consumption by buying three massive toblerones for the price of two. It is an established fact that the Toblerone family have shares in all European airports. Or you can just sit there, waiting to be herded aboard the metal tube, and contemplate what it would be like to hurtle to the ground in a terrifying death, or perhaps to plunge into a cold merciless sea.

Which brings us on to the actual flight. Like industrial livestock farmers, airlines have designed their freightage so that as many items as possible can be packed in without causing too many deaths during transit. So, aside from the odd casualty to deep vein thrombosis, you are unlikely to actually die while rammed into your deeply uncomfortable seat, although on longer flights you may wish to. The plane like the airport itself is a microcosm of the class system and in keeping with the neo liberal model has been divided into ample spaces for the very rich and much smaller spaces for the masses. However, lately there has been an attempt to create a tiny middle class by charging more for a few inches of extra legroom in select seats near the toilets. Once we are all strapped in, knees jammed against the seat in front, elbows jockeying for space on the armrest, the inane safety demonstration begins, designed solely to create the illusion that you might actually survive a crash. After the tedious taxi to the runway which in Madrid often has you wondering whether you should have taken the bus to Casablanca, or just walked, you will eventually experience take off, whereupon the more sensitive among us tend to  reflect on the fact that we have placed ourselves in the hands of an over evolved primate, who may be subject to feelings of depression and despair, or even in possession of a Freudian death wish.

Of the flight itself I have little to say because very little happens. Throughout the ordeal you will be offered “refreshments”, which once again illustrate just how much an effective business loves a trapped consumer. If you can drink and drug your way through it all then I recommend that you do so. Heavy turbulence may awake you from the stultifying boredom although it may also force you to confront the existential terror of mortality at 30,000 feet, and the futility and random nature of existence. If not, then on longer flights you might watch a crap film with crap sound on a crap screen, or if you are a smug bastard you might lose yourself in your Ipad.  If however, Dear Reader, you are able to submit to the cohorts of the cabin crew and actually “enjoy the flight” then you are either a fucking idiot, or a dangerous lunatic, and should probably not be on a plane.  In any case perhaps one day we will meet, shuffling joylessly through the Adolfo Suarez Barajas Madrid International Airport on our way to a shopping precinct somewhere out there in the great wide world. I wish you a safe and pleasant journey. 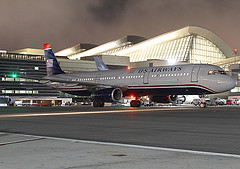