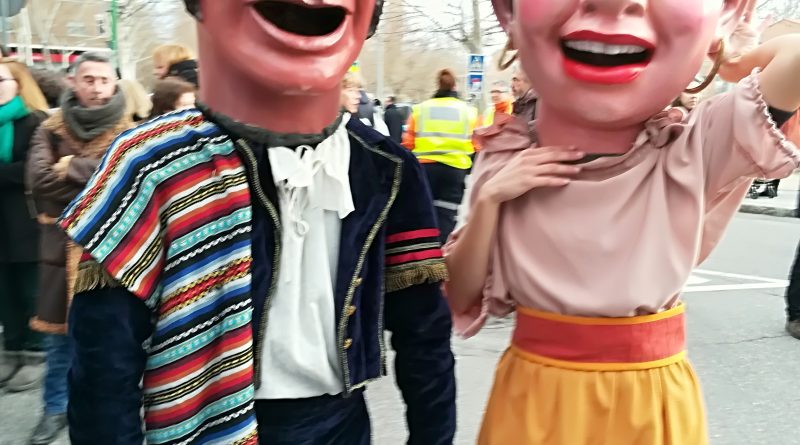 Subsequently everyone savoured the decadent chocolate. The hundred- kilo sardine shaped delicacy was this year’s official dessert for Mardi Gras.

Later that afternoon the scene shifted to the sidewalk opposite the Neoclassical Ermita de San Anton de la Florida. The bystanders stood around the monument dedicated to Francisco de Goya whose body is entombed in the aforesaid chapel. The bust of the world renown painter appeared to be watching over the town folks who had turned up for the final farewell march.

Young couples stood around with baby carriages and push cars.

The parades may not have been so flamboyant as the ones in the center. Nevertheless, they drew wide attention since the locals and old folks relate them to old Madrid and await eagerly for the last lap of the carnival. Younger members of their families and friends tag along and make the stroll lively and enjoyable.

All eyes were focused on the elegant pall bearers and on the mourners as well. The latter shed insincere tears in the midst of holding on to a small colorful box exposing a small bluish sardine. The mobiles aimed and shot constantly.

All of a sudden the imposing presence of two costumed figures made the lookers-on turn round.  Las gigantes y cabezudos (giant and big heads) were the cynosure of every eye.  These figures are the parcel of many a fiesta in Spain and Latin America.

A group of women attired in different hues and riding on            came out of the blue. Those magnificent women on their light vehicles were the life and soul of the celebrations appearing at intervals like mobile cheer leaders injecting the air with charm and megawatt smiles.

Of late women have played a major role in the fiestas. They have been demanding rights for an increase in salary, speaking out on domestic violence, animal rights and so forth.

As the night wore on the cold and the dark sky conjured up images of Francisco de Goya´s El Entierro de La Sardina (on permanent view at The Real Academia de Belles Artes de San Fernando) wherein revelers are having a ball. Two women in white are conspicuous and smart whereas the rest of the tipsy pleasure seekers huddle in the somber background in an unproportioned manner as the other objects in this masterpiece.

It was beginning to look like the epoch of the 60`s and 70´s., the unhurried pace and modest apartment buildings. Folks came out of their houses and joined the wayfarers. Some senior citizens from the hike settled down on the benches for e benches. Others went into the stores –la tienda de toda la vida (the traditional shop).  Just like the good old days. Time has stood still in this vicinity.

It was indeed an unforgettable experience being a pilgrim for a few hours walking down memory lane.

Those were the days Madrileños, how it hurts for me to bid adieu, the carnival has come to an end. Anyway, next year, same time, same place, same face. Vale.