From the 6th to 18th August, Madrid will be in full party mode, as the city celebrates its annual open-air summer verbenas. The centuries-old festivities will take place in the city’s traditional neighbourhoods of El Rastro, Lavapiés and La Latina, whose streets will be decked with bunting and lined with pop-up bars and food stalls. 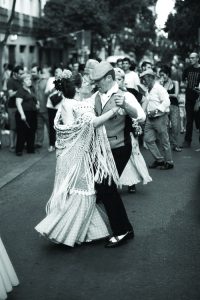 Various activities will take place throughout the day, but the party will really come alive at dusk when the intense heat subsides and locals and tourists of all ages flock to the varied open-air concerts, food and drink tastings, art exhibitions, dance workshops and theatrical performances on offer. The verbenas, like many Spanish festivals, have their roots in patron saints’ days, and visitors can expect solemn masses and religious processions in addition to beer-and-wine-fuelled revelry.

This year’s motto is “Festivals free from violent, homophobic and sexist attitudes”, setting a precedent of tolerance and openness in a country that has long grappled with anti-social behaviour and violence, particularly against women, during its myriad festivals.
Despite the addition of rock concerts and electronic dance music, the festivities still retain many of their traditional elements and a strong community spirit. To celebrate like a local, don the traditional chulapo garb and grab a partner to dance the chotis to the sound of the barrel organ, following it with a refreshing glass of lemonade. 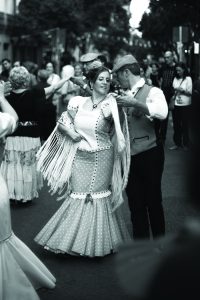