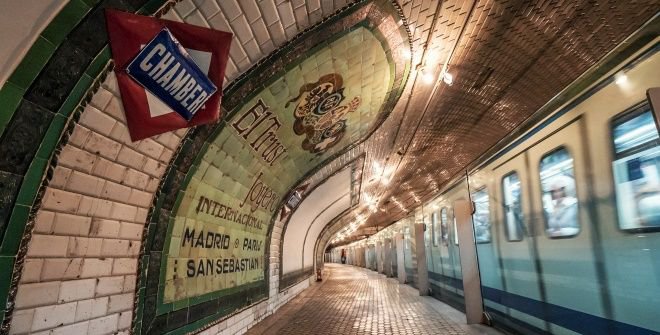 History Living in Madrid Other Posts
February 9, 2019May 29, 2020 Madrid Metropolitan

Why and where in the underground network of Madrid’s metro system
can you experience a spine-tingling shiver as your train emerges from the
dark tunnel and speeds past a lighted and disembodied ‘ghost’ station?
The why dates back to the 17 th of October 1919 when the first Metro Line
in Madrid was inaugurated. Numbered Line 1, and now recognised as the
blue line, the line connected a total of eight stations of which Chamberí is
located between the stations of Bilbao and Iglesia.

The Metro ran for four kilometres, from Cuatro Caminos to Puerta del Sol.
However, this modest start would quickly become a popular and vital part
of the urban landscape, expanding rapidly over the following decades to
become one of the longest and most comprehensive metro systems in the
world.

Designed by the architect Antonio Palacios. This was the first such project
in Spain, and the architect was inspired by the look of the Parisian
stations of the time. He managed to mitigate the possible reluctance of
the public to use the subway, by using bright, colourful materials in the
spaces in contact with travellers, such as hallways, tunnels, passage and
platform finishes, extensively using tiles and other white and cobalt blue
ceramic pieces. Its design met the criteria of functionality, simplicity and
economy.

In the 1960s, due to increased passenger traffic, it was decided to upgrade
Line 1 to allow new trains with greater capacity, up to six cars. To
accommodate this, the platforms of all stations needed to be expanded
from the previous specification of 60 meters that they had since the
Metro&#39;s opening, to the new standard length of 90 meters. Given the
technical impossibility of extending Chamberí station and its proximity to
those of Bilbao and  Iglesia , the Ministry of Public Works decided to close it
on 22 nd of May 1966.

The station remained unused for over forty years, with trains reducing
their speed when passing through it, to which the platforms were cut to
facilitate the movement. The fact that the external access had been
bricked up allowed the conservation of many of the everyday objects of
the time, such as billboards, turnstiles and even paper money. However,
the station would eventually be vandalized.

The rails and overhead electric lines continued to be maintained, but the
rest of the station fell into dilapidation and disrepair. It remained,
however, a sealed example of the transit systems origins, and thus
rehabilitation efforts began in 2006 to transform Estación de Chamberí
into a museum chronicling the history of the Madrid Metro. Opened in
2008, the museum, called Andén 0, or ‘Platform Zero,’ features a fully
restored Chamberí, complete with old ticket offices, turnstiles, maps, and
a film about the building of the Metro.

The main attraction, however, is found in the beautifully reconstructed
original ads lining the walls of the platform, composed of tiny, brilliantly-
coloured tiles just as they were in 1919. Just don’t be startled by the trains
that still rumble through this abandoned-station-turned-museum,
separated from the exhibit area only by a clear glass barrier.

The story goes that when the station was bricked up in 1966 several
passengers were still waiting on the platform for the train that would
never stop. Travel on the train between Bilbao and Iglesia and as you
emerge into the light of Chamberí, out of the periphery of your eye you
may catch a glimpse of these disembodied passengers.

It is a blink-and-you-miss-it moment, and you might just assume your
mind is playing tricks on you, but this is in fact Madrid’s hidden ghost
station.
Located under the Plaza de Chamberí, a short walk from either the Bilbao
or Iglesia stop on the Metro&#39;s line 1. The visit is free, but make sure to get
there early, as a there is usually a long line of visitors due to the ‘one
person out, one person in’ policy.

Just make sure that if you do go in, remember the exit and don’t get lost in
the maze of 100 year old tunnels or you may join those passengers still
waiting for the train that never stops!