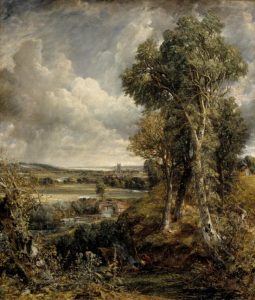 She would always be waiting at the garden gate whenever My Traveler
visited his old friends. Her favorite Uncle T as she had always known him.
His friends lived in Suffolk, in a wonderful old cottage in the Dedham Vale,
affectionally known as ‘Constable Country’.

He’d been coming down since Whisper was a baby, she was now in her
late teens and had a serenity about her that somehow captured the spirit
of the countryside. Soft dark pools for eyes and hair the color of autumn
beech leaves.

The evening was spent reminiscing, their friendship going back many
years; school days, the army, SAS, action and adventures in various parts
of the world. All the time Whisper would sit in rapt attention of her hero
– Uncle T.

Next morning, up bright and early My Traveler took Whisper for a drive.
The hood was down on his Jaguar XJS, the smooth 4.0 litre engine purred
as they swept through the Constable countryside.
“It’s so beautiful” said Whisper “wouldn’t it be wonderful to be able step
back in time and place to be where Constable painted those ‘magic’
pictures”.

The weekend was full, long walks in the woods, pub lunches games of
dominoes, which Whisper uncannily always won and soon the weekend
was over. My Traveler said his goodbyes, planned to return soon and
returned to London.

Two days later he received a frantic call from his friends.
Whisper was missing !

She had said she was going to the Tate Art Gallery in London where a
recently acquired collection of John Constable paintings were on view.
Some were on loan and one or two were new purchases of which the
most famous was the ‘Hay Wain’

It was the summer time and Whisper was wearing a bright red dress with
matching shoes. She had a small amount of money on her but unlike
other teenage girls, disdained the use of a mobile phone
The police had been alerted and notices placed, also the hospitals
between Dedham Vale and London. No trace as yet but My Traveler made
for the one place he knew where she would have been and this would be
his starting point in the search.
He first questioned the attendants at the Gallery. Those that had seen her
remembered, a slim soft spoken girl dressed all in red asking for the John
Constable gallery. They could not however recall her ever leaving.
My Traveler made for the Constable gallery, there were quite a few
people to view the new exhibition but for some reason he was compelled
to stay until he became alone in presence of the paintings.

He had been sat down for some time and was getting tired when, out of
the corner of his eye, he noticed on one of the paintings a bright red
splash of color. Out of place, for Constable used only pastel shades, but
there it was and the more he focused he realised it was a figure, a figure
of a young girl dressed in red with red shoes and autumn beech colored
hair.

Impossible but somehow the figure was part of the painting – and it was
Whisper !

Stunned and unsure of what he was seeing he approached closer to the
painting but at that moment several people entered the gallery and
before his eyes the figure faded and within seconds was no more.

The figure never re appeared and come closing time and full of sorrow My
Traveler returned home. He called his friends to see if they had any news,
deep down he felt there would be no news but he couldn’t bring himself
to tell them of what he had experienced at the Gallery. Only to say that
somehow he knew she was safe.

Next day he returned, there were seven Constable paintings in display in
the Gallery, all were scenes of the Dedham Dale in Suffolk, and the famous
Hay Wain where he had first seen Whisper.
Again the Gallery had a constant stream of people and no matter how
much he concentrated on the paintings Whisper failed to appear.
UNTIL – when the Gallery was empty he again noticed Whisper, this time
in a different painting. She was leaning against a tree, a straw of grass in
her mouth and gazing up at the clouds.
My Traveler’s heart went out to see her, she was a ‘picture’ of absolute
peace and contentment but how did she appear there and how could he
bring her home.
Next day was a repeat of the last, first into the Gallery hoping to have a
few moments alone before the visitors arrived.
AND AGAIN – there was Whisper in yet another picture, now she had been
in three out of the seven on view. Some strange tingling sensation took
shape in the back of his mind.

The next two days were somehow to be expected, arrive early, wait for
moments when the Gallery would be empty and focus on the remaining
four paintings, excited to see which one she would appear in. Sometimes
the periods would be short, appearing and fading but for My Traveler they
were special, just for him.

On day six of his visits to the Gallery, Whisper appeared but there then
occurred an event so very different from the others that set the tingling
sensation in motion and raising the hairs on the backs of his arms and legs.

Whisper was sitting on a narrow stone bridge over a small brook, in the
background a water wheel. She was gazing down on the water and as My
Traveler heard the approach of visitors she looked up and gazed into his
eyes, she was sending a message and then she faded.
Next day was the last, for only one picture remained in which Whisper
could appear. My Traveler was in fear as to what would happen when
there were no more paintings.

Alone and concentrating she again appeared, a bright red splash of color,
this time standing by the side of a small lane. Somehow My Traveler
sensed she was waiting but waiting for what ?
As sounds approached she turned to her Uncle T smiling and raising her
arm in a beckoning wave. Fading away My Traveler was heartbroken and
saddened to think that he had seen the last of his Whisper.

His head slumped down on his chest and he drifted off into a troubled
sleep:
UNTIL – he awoke to feel a pair of slim arms around his waist and a slim
figure with hair the color of autumn beech leaves and wearing a red dress
and matching shoes.

Whisper was back and said in soft voice

“you didn’t really mind Uncle T did you, I just had to visit Constable country
in that time and place and I knew you would be waiting for me”