Maybe it’s the after-effects of dry January, but the economic prospects for Spain don’t look as bright as they did a few months ago.   Five years on from the deep crisis which began in 2008, the recovery has never really felt like a bonanza for most Spanish.   A downturn now will catch many unable to cope.

Whatever Government is in power after the April elections will struggle too.  Between 2008 and 2014, public debt swelled from about 40% of GDP to nearly 100%, as tax income plummeted and increased welfare payments strained the budget.   Overall debt has barely budged from then, so there is very little wriggle room for Spain to loosen the purse strings in a new slowdown.

Events both in Spain and elsewhere are conspiring to dampen expectations.  Europe has been slowing for a while but the latest figures for industrial output in countries like Germany and France give food for thought.  Zero interest rates are probably doing more harm than good.

Much of Spain’s recovery was thanks to good Spanish companies – of which there are many, although not enough – getting out and exporting, but export growth is now stalling too.  Last November was the worst November for people in work since 2013.   Most analysts are trimming growth estimates at a time when world trade may be hit by trade wars, protectionism and Brexit.

In Spain a perfect storm could be brewing.   The result of the elections on 28th April will require horse trading to form a government between two blocks, formed by left/hard-left and separatists on one side, and centre-right, right and hard-right on the other.  The parties may not want to show their hands by forming alliances before the European, regional and local elections in May, so don’t expect any kind of Government before June.  While all that’s going on Spain may need to grapple with the effects of a hard Brexit, which would hit the economy – UK tourists are the most numerous customers of Spain’s biggest industry, so if fewer Brexit-battered Brits make it over, whether it be because of air routes being cancelled or the pound tanking, Spain will notice. 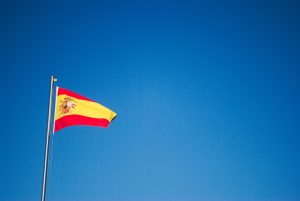 The Sánchez government has hardly inspired confidence.  He trumpeted a 22% increase in the minimum wage to €900.   That will destroy 150,000 jobs says the BBVA.  Sánchez is right in thinking that ideally Spain’s workers should earn more, but the best way to achieve that is to create a dynamic labour market and above all make it easier for small and medium businesses to hire employees.

Spain has 2.8 million companies with between 0 and 9 employees – imagine if they could all take on just one more employee.    The Sánchez  government – and to be fair, the conservative PP government which preceded it – gives the impression that companies are there to be milked to pay for electoral promises.

For a worker on an average wage, 42% of the cost to the employer are taxes.  Private sector workers (13m) are outnumbered by those whose salaries, pensions or benefits are paid for by the state (13.7m) – public sector, pensioners and unemployed.  Anyone concerned about the future for the young should be worried by those statistics.

The elections were triggered by the Sánchez budget being voted down in Parliament, because Sánchez didn’t cave in to all the demands of the Catalan Nationalists, whose votes put him into power.   But it deserved to be shot down.   It locked the state into more structural spending, to be paid for by wishful thinking – a ‘google’ tax that won’t raise anything like what Sánchez has estimated, and a kind of ‘Tobin’ tax which won’t raise anything at all.   The European Commission openly said that the budget would break agreed deficits.

The problem for any Spanish government is that it actually has very few options to cut spending without hitting welfare hard, given that the Regional governments control the bulk of the budget, and much of what’s left is untouchable.  That’s why the socialist former PM Zapatero was forced in the last crisis to impose a 7% pay cut on public sector employees.

So is it all bad news?  Not all.  To start with, barring shocks from abroad, the slowdown won’t be like the last crisis and recession can and should be avoided.   What’s needed is a Government which encourages employment, and doesn’t look to squeeze every cent out of SME’s and autonomous workers.  It would also help if the political parties engaged in serious debate on thorny issues, without demagoguery, and with an eye on the long-term future and not just the next elections.  A big ask, visto lo visto.