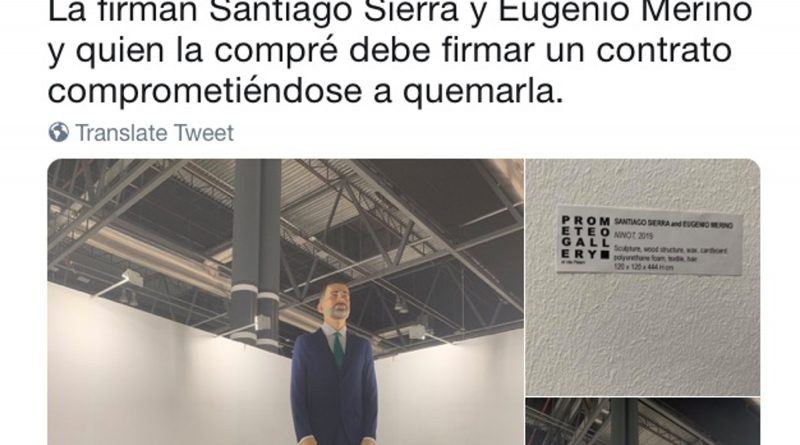 An anti-capitalist artist has presented a huge perfumed wax works figure of the Spanish king at a contemporary art fair under the agreement that the buyer of the 200,000 EUR piece must burn it within a year.

The statue is four metres (13 feet) tall and is even scented with the perfume Dark Blue by Hugo Boss, reportedly the 51-year-old Spanish king’s favourite fragrance.

Gallery owner Ida Pisani confirmed to local media that the would-be buyer of the huge effigy has to agree to burn it within one year of purchase.

The collector would have the rights to document the burning and keep the interior skull afterwards, which is made with fireproof material to save it from the flames.

Pisani added: “I like to work with Sierra and besides his political statements I believe that he is an artist rooted in reality who focuses on key issues.”

Santiago Sierra previous exhibited a piece called ‘Political Prisoners’ at the ARCO art fair which was subsequently removed for being offensive, according to reports.

His collaborator Merino caused controversy in 2012 with the piece ‘Always Franco’ which featured a sculpture of the Spanish dictator inside a vending machine.

Luis Navarro, a spokesperson for Santiago Sierra’s studio told Central European News (CEN): “There are several parties interested in buying the piece, but the sale has not been closed yet.”

“I was around the entire creative process. It took one year in total. It was very complex and started with making the moulds, creating the statue, and adding human hair and all the many details.”

The spokesperson added that the idea to destroy the King Felipe VI statue did not come from British artist Banksy, who famously shredded a one-million-GBP painting during a Sotherby’s auction in October last year.