Hospital staff have thrown a heartwarming ‘graduation’ party for this baby boy who was born weighing only 500 grams and has now left the intensive care unit. 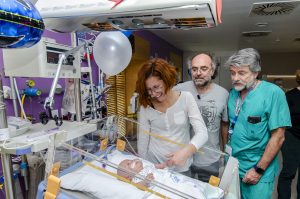 Baby Salvador was born after only 24 weeks of his mother’s pregnancy along with a twin brother who didn´t make it at the Gregorio Maranon Hospital in central Madrid.

The baby, whose parents’ names have not been reported, weighed just 500 grammes (1 lb 1 oz) at birth and was taken to the Intensive Care Unit (ICU) in the hospital. Staff at the hospital have now thrown a ‘graduation’ party for the tot as he was moved to the Intermediate Care Unit.

The Head of the Neonatology Unit of the hospital, Manuel Sanchez Luna, told Central European News (CEN) that Salvador “is a very special case, for the family. He was born only in the 24th week of pregnancy in a twin pregnancy, weighing only 500 grams. The other twin boy died.”

He also commented that at the beginning “Salvador did not have very big problems, but step by step there were some issues. Premature babies commonly stay around 60 days in the Intensive Care Unit, but Salvador was there for longer.” 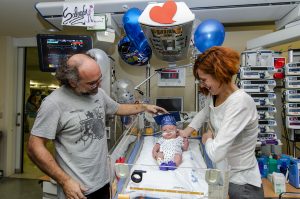 He added that Salvador was one of the babies that stayed in the unit for the longest time.

The doctor added: “The parents were involved a lot in the care of their son, doing shifts as they had a three-year-old daughter at home.”

One of the two parents was in the hospital 24 hours a day according to the doctor who added: “The moment the baby was released, we wanted to thank them for their work with the baby and to pay tribute to the parents.”

The photos show the surprise party the staff held for the tot and his parents.

Salvador has “recovered well” according to Luna who said that despite some small issues he is doing well and he hopes he will be released soon.

He said that premature babies with only 24 weeks of gestation have a survival rate of 30 to 40 percent.

The Intermediate Care Unit contains patients with a low risk of needing therapeutic measures of vital support, but need more monitoring and care than can be received in the normal wards.