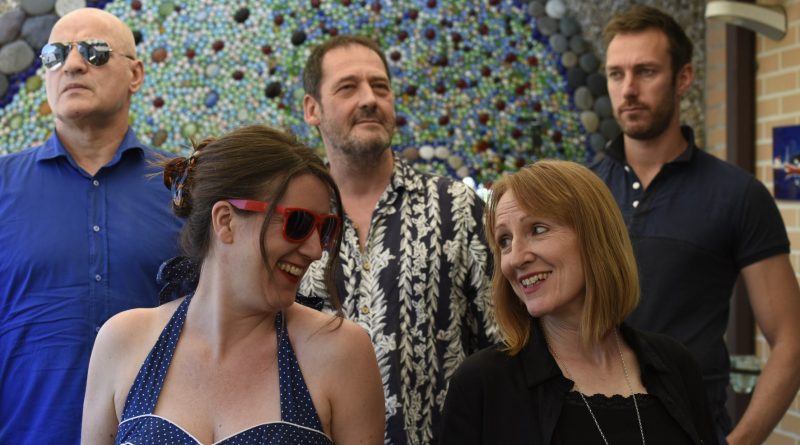 The Lovehearts make their international debut at the 10 club, Avenida del Mediterráneo 10 on Saturday 24 June at 21:00…It’s gonna be a party!

The Lovehearts are Rebecca Perrett, lead singer, percussion, glockenspiel and violin from the West Midlands; Caroline Bradbury, bass and vocals, from Manchester; Mark Scott, guitar and vocals, from Sunderland (although incredibly he supports Newcastle United FC); Chris Neill trumpet, bass, and percussion, from Bristol; and me, Steve Jenkins, guitar and occasional dodgy vocal and harmonica, from London. I’ve just bought a synthesiser too, so Depeche Mode should watch their step.
So, we’re all English, but we’ve lived in Madrid forever, and we really feel like a Madrid band. We all love this city, and as you know anyone can be a madrileño.

What kind of music do you play?

That’s a difficult question. We don’t really know. I think we’re a pop group but that could mean anything. Three of us used to be in a band called Los Cold Hearts which started out as a bluegrass/acoustic blues band but then evolved. But pop group is fine by me. Nothing better than pop music. All of us like lots of different types of music. I’m a punksoulrockabillyreggaepopindierockfan. Chris used to be lead singer in a thrash punk band called Disorder, (he’s our most famous member), although I think he likes jazz and flamenco these days. Rebecca likes her pop music clean and wholesome, so of course she was a big fan of Take That when they used to writhe around on the floor naked covered in olive oil. Caroline is a bit of an indie kid and surprisingly she likes all those Manchester bands. Mark was a big Oasis fan, and still is, although I’ve managed to get him to accept that Noel Gallagher can’t write words. And we all love Bowie, except Chris who thinks he’s an arty twat.
We only do original songs, partly because I can’t be bothered to learn other people’s. We all contribute to them, so we’re a big mix of influences, which is how it should be. Eclectic is what we are.

Well obviously you’ve got the stadium gigs which I despise, but if you really want to see Madonna or Bruce Springsteen from half a mile away and have lots of cash then fine. What I love about Madrid though is that you can see some great bands in much smaller venues than in the UK. There’s loads going on and we are quite enthusiastic gig goers, although watching name bands is a sanitised and relatively expensive experience these days. But so is everything.
But there’s plenty of interesting live music which is free or very cheap. Places like La Fidula in Calle Huertas have regular live music, mainly Spanish performers, including my all time favourite Alicia Ramos, who is from the Canary Islands which is apparently a separate nation. She sings in Spanish and English. Everyone should go and see Alicia. She’s funny, intelligent, passionate, and very entertaining.Then bars like Cafe Palma, Libertad 8, and our previous spiritual home, the Dog & Roll, now in new premises, all have live music on. Also you have a lot of open mics. Triskells usually have one on Thursday nights run by our mate Richard Harris. Lots of performers, lots of variety.
Going to see amateur/semi-professional bands in places like these makes for a great night out and it rarely costs more than 8 euros and is often free. Much better than just sitting in a pub, which you can also do before and after.

Why are all your songs in English?

We’re quite a lyrical band, and English just comes easier. i’ve been speaking it all my life. I keep wanting to write a song in Spanish though. It will happen.

When can we see you?

The Lovehearts make their international debut at the 10 club, Avenida del Mediterráneo 10 on Saturday 24 June at 21:00. We will be followed by Richard Harris djing with the best music in town. The 10 Club is an ice cream parlour upstairs. You can’t go wrong. Ice cream, beer, and live original music. It’s gonna be a party.