Every year Madrid celebrates the feast day of it´s patron San Isidro. Due to the ongoing coronavirus lockdown in Madrid there will be no official celebrations to mark tomorow the 15th May so we would like to tell you a little about a man who is attributed with 438 miracles. 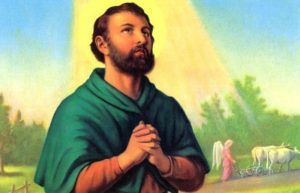 Isidro ( El Labrador) was born in Madrid in 1082. At that time Madrid was still a Moorish fortress and settlement and was ruled by the Berber principality or Taifa of Al-Tagr Al Awsat whose capital was Toledo and which then covered all of central Spain along the Tagus River.

The Moorish muslim rulers were tolerant of Christian worship. They were eventually defeated by the Christian King Alfonso VI of Leon and Castile who took Madrid in 1090.

This then was the world that Isidro was born into. His family were poor labourers ( hence his name El Labrador) who worked for a powerful local landowner, Juan de Vargas. Isidro toiled the land and lived the life of a poor peasant. He married Maria Torribia, who was to also become a saint as Santa María de la Cabeza. 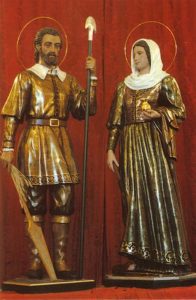 He is credited with over 400 miracles of which the most famous concerned his infant son who it is said fell down a well. Isidro prayed to the Lord and the waters of the well miraculoulsy rose to the surface bring the child with it and thus saving his life.

The Pozo Del Milagro can still be seen outside the Casa de Isidro.

His other miracles include:

One day, his fellow farm workers complained to Vargas that Isidro was late for work. Thereupon it wss found that Isidro was in fact praying but the land was being ploughed by an angel.

On another occasion, his master saw an angel ploughing on either side of him,so that Isidro’s work more than all the other peasants working the field.

Isidro is also said to have brought back to life his master’s deceased daughter, and to have caused a fountain of fresh water to burst from the dry earth to quench his master’s thirst.

One snowy day, when going to the mill with wheat to be ground, he passed a flock of wood-pigeons scratching vainly for food on the hard surface of the frosty ground. Taking pity on the poor animals, he poured half of his sack of precious wheat upon the ground for the birds. When he reached the mill, however, the bag was full, and the ground wheat,  produced double the expected amount of flour. 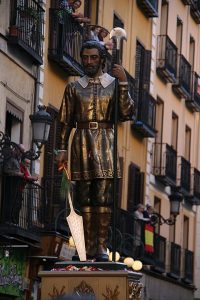 One day he brought home hungry people to share a meal with his wife Maria. After she served many of them, Maria told him that there simply was no more stew in the pot. He insisted that she check the pot again, and there was now plenty.

Indeed he is said to have played a part in the Reconquista too,for some 20 years after his death in 1212 he is appeared to the Christian King Alfonso VIII of Castile and Leon, and showed a hidden path by which he was able to surprise and defeat the Moors at the Battle of Las Navas de Tolosa.

In the same year his body was discovered in an apparent state of incorruptibility after torrential rains had exhumed cadavers from the cemetery.

Over the centuries his relics have been used for their alleged healing powers. His bones and teeth have been removed to cure the illnesses of the wealthy and royal family.

King Philip III  was said to be have been cured of a deadly fever after having drunk the “holy” water of a spring that Isidro had blessed. A hermitage was built on the site on the Pradera de San Isidro to commemorate this and it remains the spot on which today the crowds flock on the 15th May to drink the water.

In 1769, Charles III of Spain had the remains of Isidro and  Maria relocated to the church of his name where it still remains. In 1947 it was place on public display to pray for rain during the drought of that year. It´s last public outing was in 1985 and the next one is due for 2022 though we might see it earlier to take on the coronavirus! 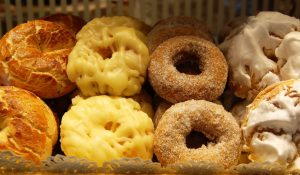 Although there will be no crowds or commemoration the shops will be still be selling and the abuelas baking Rosquillas De San Isidro traditional cakes to be enjoyed in a lockdown or not.