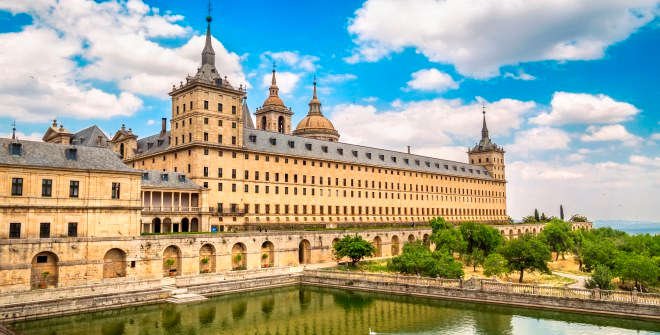 Excursions Other Posts What’s on in Madrid
January 4, 2019May 29, 2020 Madrid Metropolitan

Why is it that San Lorenzo de El Escorial is considered the literary centre of Spain.  Recognized as a World Heritage site by UNESCO in 1984 it attracts artists, writers, poets and painters from all over the world and hosts a plethora of literary events, seminars and conferences.

Undoubtably its location, surrounded by forests, clean atmosphere sparkling streams and spectacular views plays a major part but there is also a somewhat sinister element that may play a contributing part.

San Lorenzo de El Escorial, also known as El Escorial de Arriba is a town and municipality in the Community of Madrid, located to the northwest of the region in the south eastern side of the Sierra de Guadarrama, at the foot of Mount Abantos, 47 kilometres from Madrid.

Since June 21, 2006, it has been protected by the Community of Madrid as a Property of Cultural Interest.

The history of San Lorenzo de El Escorial is inexorably linked to the construction of the Monastery under the orders of Philip !! of Spain, started in 1563 and completed in 1584.

The most important parts of the building, include the Pantheon of Kings, the Basilica and Real library. From the sixteenth century the Escorial Monastery has been described as ‘the eighth wonder of the world’.

Philip II was known as Felipe el Prudente, a cautious thinker and, governing the largest Empire, needed wits, intelligence and creativity to maintain his authority.

AND did that creativity come from his instinct in selecting for his Monastery a location built upon the solid mass of granite that was Mount Abascos.

NOW granite, a very hard igneous rock has proportionally higher levels of Radon than other natural minerals and is a colourless, odourless radioactive gas that gradually seeps through the rocks.

A study carried out by Enrique Rubio of GEOMNIA examined over 55 properties in the El Escorial region where the buildings contained basements with walls and floors built out of granite.  The study revealed the level of Radon was higher in enclosed basements although dispersed at ground lever harmlessly into the open air.

Radon has, by the World Health Organisation, been recognised as where, in exceptionally high concentration levels, is a contributing factor to one of the causes of pulmonary cancer.   Some comparisons are made to the smoking of average 10 cigarettes per day.

SO whether it is a relaxing and/or occasional smoke or the ‘perfume’ of the radioactive Radon seeping through the granite rocks it has become a magnet for those creative writers, poets and artists the reside and visit San Lorenzo de El Escorial.

Take a visit, view the magnificence of the Monastery and as you feel the calming and relaxing atmosphere, becoming inspired and creative it may just be down to the radioactivity of Radon seeping through the rocks and ground.