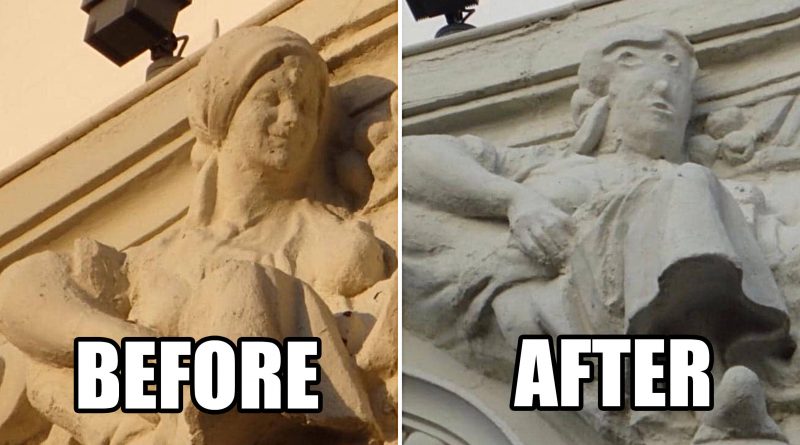 The world of Spanish antique restoration is yet again the subject of mirth and ridicule as yet another comically poor restoration work has come to light.

This time the culprit is carved into an early 20th-century building in the city of Palencia in the province of Castilla y Leon in north west Spain.

Where once sat a beautifully crafted sculpture of a woman beside some livestock the unnamed “restoration expert” has replaced it with what social media users say is more akin to Mr Potato Head, Donald Trump, or “sand sculptures kids do on the beach”.

The restoration joins the long and seemingly growing list of disatrous results which include the unintentionally iconic Monkey Christ, the Tintin St George 14th Century Christ Restoration Faces Derision, the near-fluorescent Virgin On The Ridiculous – Another Art Restoration Bodge Job– not to mention the less than sinlessly executed Immaculate Conception

What was once the smiling face of a woman next to some livestock has been replaced with a crude resemblance to US president, Donald Trump.

The bodged restoration came to light after an artist placed pictures of the offending visage on Facebook and Twitter.

“The pictures are a bit blurry, but you can see the prank perfectly well,” said Antonio Guzmán Capel. “It looks like the head of a cartoon character.”

The 20th-century Ecce Homo-style fresco of Christ, in Borja, Spain before and after an amateur restoration.

All is not lost however for as in the case of the Monkey Christ the tables can be turned.  Each year thousands of visitors come to visit the small church where the Ecce Homo is displayed behind a protective screen.
In addition a booming cottage industry catering to the visitors who buy Ecce Homo key rings, T-shirts, teddy bears and mugs.

But for restoration experts in Spain, the latest bodged job is another example of the lack of adequate industry standards. “THIS #IsNotARestoration,” Spain’s Professional Association of Restorers and Conservators tweeted .