Madrid taxi drivers brought was was decribed as ” misery and mayhem” to the Spanish capital today in the first day of what the E.F.E ( Federation of  Madrid Taxi Professionals) threatened would be a series of “spontaneous and indefinite” unofficial strikes. The campaign is designed to bring pressure on the newly formed government to bring national legislation to curtail the growth of Cabify and Uber in Spain and address their member complaints of the number of VTC private chauffeur licences in issue.

The action in Madrid included pickets and roadblocks of key central points throughout the city and comes in support of recent similar action in Barcelona.

The scenes in Madrid brought chaos for international travellers who found themselves fighting for limited spaces on public transport into Madrid. Many more, experienced disruption to their journeys as they seeked last minute ways of getting to the airport in time for their flights.

However despite the wildcat strike both Cabify and Uber were operating normally and many chauffeur companies saw a spike in business as travellers booked their airport transfers with them as opposed to traditonal taxis. A spokesman for Madrid based  Iberian Chauffeur said ” we understand their concerns but you cannot protect your livelihoods by threatening the livelihoods of others”. 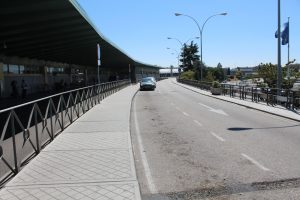 Barajas Airport which handles some 130,000 travellers a day seemed more like a ghost town at the arrival and departure points with a heavy police and civil guard presence to keep order.