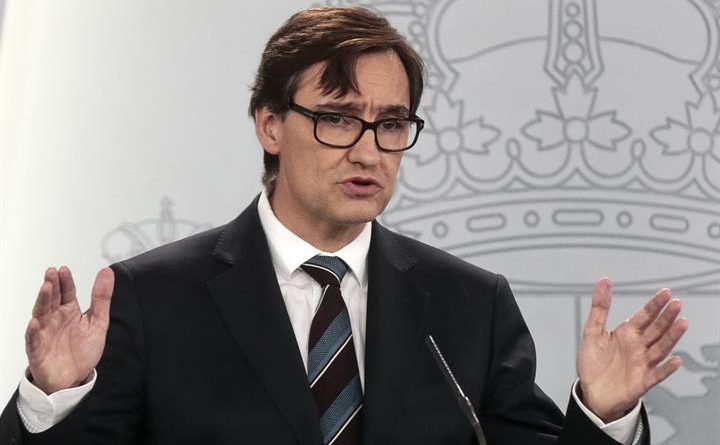 Salvador Illa, the Spanish Spanish Health Minister today announced a series of public health measures in an attempt to arrest the continuing growth in the number of Covid-19 cases being registered throughout the country.

The measures come as the latest figures showed that  2,953 new coronavirus infections have been detected in the previous 24 hours in addition to the 7,550 confirmed Covid-19 being monitored and treated at the present time. The figure is the highest number since April when Spain was under the lockdown of the state of emergency.

However the minister stressed that “the situation is not comparable with the one that we had in April,” with far fewer hospital admissions and a much higher percentage of asymptonmatic and mild cases of the virus.

The minister announced that public smoking will be prohibited if the 2 metre social distancing cannot be maintained. The measure had previously been introduced at a local level in Galicia and the Canary Islands.

In addition all restaurants, bars and clubs will have a closing time of 01.00 with no new customers allowed to enter from 00.00. Police will have additional resources to patrol streets to clamp down on clandestine clubs and street “botellones”.  Establishments would need to  guarantee a minimum safe distance of 1.5 meters  and maximum group size of 10 diners per table.

Illa also announced that there would be greater co-ordination between the 17 autonomous Communidades to be allow for better response to the coronavirus surge.

In addition old people´s homes will have greater scrutinity and be subject to more testing and fewer visits from relatives.

Also on Friday, the Madrid regional government announced that it would begin free random testing in areas that are being hardest hit by the coronavirus, such as the districts of Carabanchel, Usera, Villaverde and Puente de Vallecas, and the municipalities of Alcobendas and Móstoles.

The region has been the epicenter of the health crisis in Spain, and for the last month there has been a steady rise in positive cases and hospitalizations due to Covid-19. The aim of the testing drive is to detect asymptomatic cases who could be spreading the virus without knowing it. People aged between 15 and 49 will be contacted randomly by SMS text messages offering them a PCR test. The regional government is aiming to carry out around a thousand tests a day, in primary healthcare centers, and provide the results within 48 hours